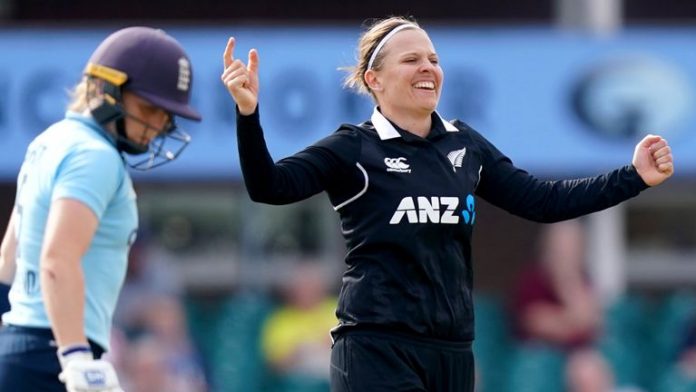 Watch the fourth ODI between England Women and New Zealand Women live on Sky Sports Cricket from 12.30pm on Thursday, with over-by-over commentary and in-play clips on the Sky Sports App and skysports.com

England captain Heather Knight says Katherine Brunt’s workload will be carefully managed ahead of next year’s Ashes and 50-over World Cup defence.

Brunt, 36, top-scored with 49 not out and then took 4-22 in Tuesday’s third ODI to turn what could have been a White Ferns walkover into a nervy three-wicket win for the tourists.

The seamer left the field at Leicester before the White Ferns completed their chase – having been rested for the second match in the series – and Knight stressed it’s important England keep the leader of their attack in prime condition.

“She’s a warrior. She brings so much to our side and I think the biggest thing is competitiveness and the high standards that she sets for herself,” Knight said.

“She sets that for everyone else and she drags people with her as well. It brings the best out of people.

“She just had some sore heels as she went off, she’s got plantar fasciitis (pain in the heel and foot arch), so that was the reason she went off.

Unbelievable Kathy B, we’re lucky to have you! 👸🏼 https://t.co/HWA7U8dScq

“Obviously, with all our players, we’re trying to manage them and trying to look after them and Katherine isn’t a spring chicken any more.

“We want to get her in the best possible place early next year, because she’s going to be a huge part of us being successful, hopefully, in Australia and New Zealand.

“She has a lot of characteristics – resilience is a huge one as well. The way she’s come back from two pretty serious back injuries, two back surgeries, and she’s always willing to put herself and our body on the line for the interests of the team.”

England lead the five-match series against New Zealand 2-1 with two to play, but are hoping to put right some slack batting which has seen them bowled out inside 50 overs on all three occasions to date – starting with Thursday’s fourth ODI at Derby.

“As a top-order, we’re pretty disappointed at not being able to put together a total and leaving the tail with a lot to do,” Knight reflected.

“So it’s a bit frustrating but we know with the talent that we’ve got in that batting line-up, we know we’ve got to find a way to turn it around quickly. We really have to take responsibility to be the ones to score those runs.

“Partnerships is a big word – we’ve lost wickets in clusters throughout this series and we need to find a way to be a little bit better.

“We’ve identified that when we sometimes bat first that we want to be a lot better on tougher wickets and find a way to push past that 250-mark consistently – and when the pitch is really good to go way past it. We need to be better as a batting group.”

Watch the fourth ODI between England Women and New Zealand Women live on Sky Sports Cricket from 12.30pm on Thursday.