Home Sport Are the Cowboys better without Zeke? 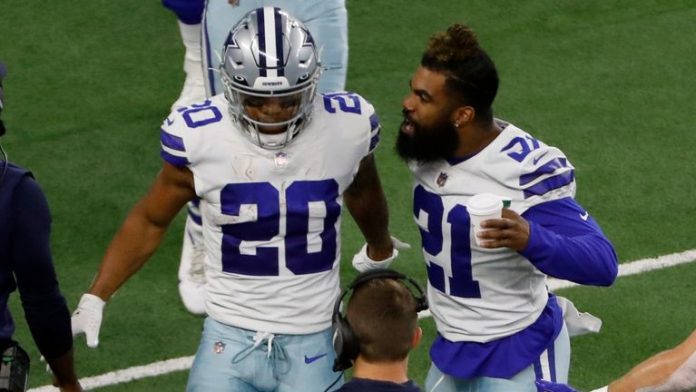 Good Morning Football’s Kyle Brandt: “Tony Pollard should be playing more; he is the starter by every metric except for fame and his contract. Zeke should absolutely still be part of the offense, but he should be the ‘change of pace’ back”

The Dallas Cowboys earned their first win of the 2021 NFL season with a narrow 20-17 triumph over the Los Angeles Chargers on Sunday, but is a change needed at running back in order for this team to reach its true potential?

Eziekiel Elliott has been the starter in Dallas ever since being taken with the fourth overall pick of the 2016 NFL Draft. He rushed for a staggering 1,631 yards and 15 touchdowns in his rookie season and, after topping 1,000 again in 2018 – 1,434 to be precise – he signed a six-year extension worth $90m to keep him under contract with the Cowboys through the 2026 season.

But Elliott’s influence in games has since been on the decline. In 2020, he rushed for just 979 yards on the season, at a career-low mark of 4.0 per carry. All the while, his back-up in Dallas, 2019 fourth-round draft pick Tony Pollard, is showing flashes in relief of Elliott.

Both had big games in the Cowboys’ Week Two win, with Pollard rushing for 109 yards off 13 carries and Elliott 71 off 16 – each finding the endzone – but Good Morning Football’s Kyle Brandt wonders whether Dallas are better off handing over the reins to Pollard more regularly.

“Right now, Ezekiel Elliott is playing more than Tony Pollard for two reasons: his contract and his fame. It is not for his game or his tape.

“I don’t want to beat up on Elliott, this is more about championing Pollard. But put on a Cowboys game for 10 minutes and you will find that the Cowboys offense and run game is fresher, faster and bolder when Pollard is on the field over Elliott.

“And this is not a new thing. This has been going on for a couple of years now but nobody has wanted to say it. And if you don’t trust the optics, trust the numbers.

Tony Pollard has four of the Dallas Cowboys’ five longest runs since being drafted in 2019 (Dak Prescott the other). Ezekiel Elliott comes in sixth with a 33-yard gain. in 2019.

“Zeke’s fame and his reputation are still living off his production from many years ago when he came into the league and was a rookie superstar.

“But haven’t the Cowboys had enough ‘cool’, printed enough jerseys. Maybe it’s time to print some [championship] banners by playing the best player at every position, independent of dollars, followers and jerseys sold.

“They signed Zeke to an irresponsible contract and now, here we are years later, he’s the second-best running back on the Cowboys and is still starting.

“Pollard should be playing more; he is the starter by every metric except for fame and his contract. Zeke should absolutely still be part of the offense, but he should be the ‘change of pace’ back.

“I’m not saying Pollard is a 30-carry guy. But on Monday night, against the Philadelphia Eagles, I want him on the field for the big drives, the opening drive, the game-winning drive.”

Watch the Dallas Cowboys host the Philadelphia Eagles in an NFC East division rivalry clash on Monday Night Football – live on Sky Sports NFL from 1.15am on Tuesday morning.