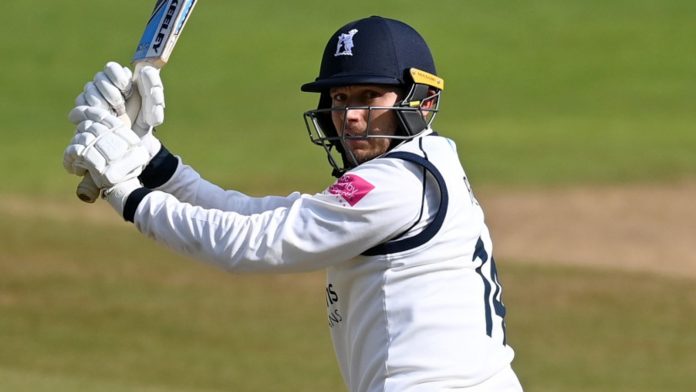 Danny Briggs starred with bat and ball for Warwickshire against Somerset to ensure they hold a slight upper-hand in the LV= Insurance County Championship title race.

With wickets tumbling between the other Division One contenders Lancashire and Hampshire in Liverpool, events at Edgbaston provided another change in who holds the initiative of a fascinating four-way battle.

Warwickshire started day two knowing reaching 350 in 110 overs was crucial and Briggs’ knock of 53 from 31 balls ensured they achieved that before he claimed two wickets to reduce the visitors to 239-5 at the close, a deficit of 128 runs.

💬 “Becoming a white bear is the pinnacle and it was a really special moment for me. When you get your first-team cap you join a very elite club of cricketers.”

Great words from Ashley Giles as he presents @DannyBriggs_14 with his white bear cap. 🙌

Half-centuries from Tom Lammonby (59) and Azhar Ali (60) provided resistance for Somerset, but the home side know the equation is simple – win and they will be county champions for the first time since 2012.

Another back-and-forth day occurred at Aigburth where James Vince’s 69 looked to have Hampshire on top before Lancashire fought back admirably late on in the final session.

Pakistan international Mohammad Abbas ran through the hosts in Liverpool to dismiss them for 141, a deficit of just two, and ensure another twist in the title race had occurred.

Hampshire finish the day 158-7, a lead of 160 runs! pic.twitter.com/yLwIJtCFRc

Having failed to claim any batting points, Lancashire made a great start in the field with Tom Bailey reducing Hampshire to 24-4 but Vince hit back only for Matt Parkinson to pin him in front after an 80-run partnership with Liam Dawson.

It was a telling blow and yet more was to come with Bailey able to bowl Dawson to complete his five-for before the close and leave the away side on 158-7, a lead of 160, in a delicately poised match that may see both teams disappointed come its conclusion.

Elsewhere, Nottinghamshire took control of their clash with Yorkshire but a lack of batting points means they will not be involved in the title drama on the final two days of the regular season.

After being dismissed for 296, Luke Fletcher and Joey Evison combined for seven wickets to dismiss Ben Coad’s side for 78 at Trent Bridge.

The follow-on was enforced and Yorkshire fared better with Adam Lyth unbeaten on 74 but they still trail by 54 at the close with only seven wickets in hand.