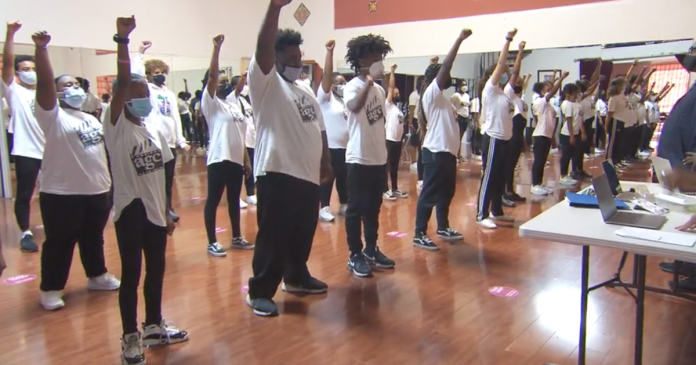 Los Angeles — Walking through the front door of a former speakeasy, the voices you hear are empowered. At-risk youth are finding themselves through performance art at Amazing Grace Conservatory, which offers classes in dance, improv, singing, acting and spoken word.

Nijah, a 13-year-old, says singing makes her feel bold. “It gives me a chance to express my emotions in a different way than talking, because for me, sometimes talking about what I really feel can be hard,” Nijah said.

Actress Wendy Raquel Robinson, who grew up in South Los Angeles and co-founded the nonprofit, says discovering the arts at a young age changed her life.

“There were gangs,” Robinson said. “In my high school yearbook there were 10 pages that were dedicated to lives that have been gone by drive-by shootings and I had to make a choice.”

She started Amazing Grace Conservatory to give other at-risk youth a stage and a chance.

“I think the greatest thing you can give to a child is a platform for them to have their voice,” she said. “It’s not about just acting, singing and dancing. It’s about those life skills.”

More than 7,000 students have performed there, including 12-year-old Braylon, who says improv classes helped him face uncertainties.

“In life, you don’t really have a script to live based off of. You basically have to just go based on what’s in your mind,” Braylon said.