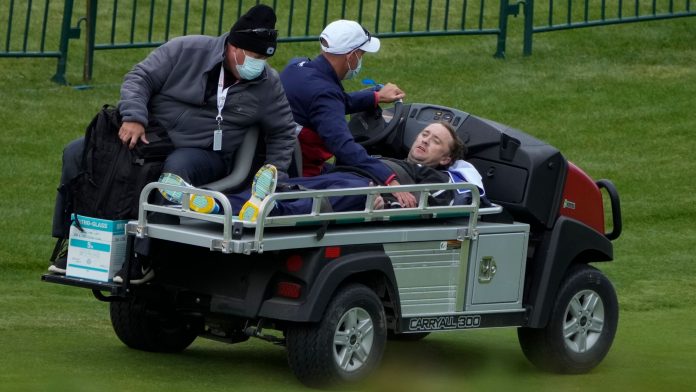 Tom Felton has been carried off a US golf course after appearing to collapse during a celebrity tournament.

The Harry Potter star, who celebrated his 34th birthday on Wednesday, had been playing a two-person scramble competition made up of sport and entertainment celebrities ahead of the Ryder Cup.

Shortly after the conclusion of his match at Whistling Straits, where the Europe v United States golf showdown will be held this weekend, he appeared shaky and pale.

Surrounded by other players, volunteers and officials, he was helped to his feet and driven away on a golf cart for medical evaluation.

The PGA of America said in a statement: “In today’s Ryder Cup Celebrity Match, actor and musician Tom Felton experienced a medical incident on the course while participating for Europe.

“He was transported to a local hospital for treatment.

“No further details are available.”

Felton had been playing alongside Olympian Dan Jansen and hockey players Teemu Selanne and Mike Eruzione.

Earlier, he had delighted Harry Potter fans in the crowd by briefly pretending to use his golf club as a broomstick.

Felton played the role of Draco Malfoy in the Harry Potter films for more than a decade.

Malfoy was Harry Potter’s cunning wizardly rival in the popular saga based on JK Rowling’s novels.

British-born Felton was also in the movie From The Rough, which tells the story of the first woman to coach a men’s Division I golf team.

‘We’re like The A-Team’: The Charlatans’ Tim Burgess on marking an unusual 31-year milestone

Why Britney Spears says she is celebrating Christmas early this year

Adele’s best songs for every mood