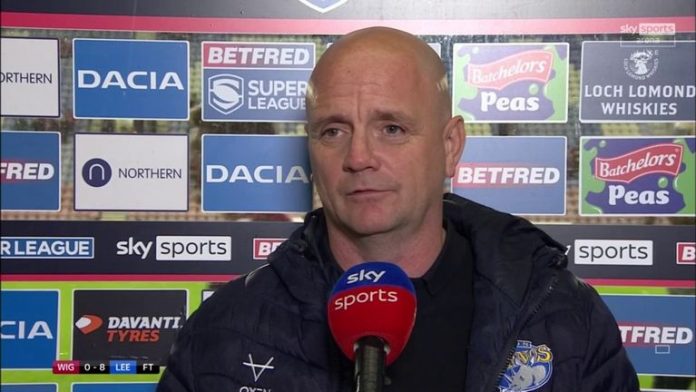 Agar praised Leeds’ commitment to each other and their ability to come through adversity after the 8-0 win at the DW Stadium; The defeat brought Wigan head coach Adrian Lam’s time at the club to a close

Richard Agar is convinced his Leeds Rhinos players have the right mentality to go all the way to the Super League Grand Final after knocking out last year’s runners-up Wigan Warriors.

Winger Ash Handley scored the only try of the game as Leeds secured a semi-final berth with an attritional 8-0 win in the opening Super League play-off tie at the DW Stadium.

Leeds now face a trip to either Catalans Dragons or St Helens next week and with it a chance to win the title from fifth place for the third time.

Ash Handley’s try helped Leeds into the Super League play-off semi-finals as they edged out Wigan 8-0 on Thursday.

“I’m not surprised we’re in the penultimate game because I’ve seen the commitment to each other and their ability to ride adversity,” Agar said.

“We know we’re going to be playing a really good team and what a difficult task it will be to get through to the Grand Final, but we’ll give it our best shot.”

There was little to choose between the sides in a point-less first half but, once Handley broke the deadlock nine minutes into the second period, courtesy of full-back Richie Myler palming the ball back from Kruise Leeming’s high kick, they took a stranglehold on the game.

“There was a bit of luck or good judgement about the way we scored our try, whichever way you look at it, but he definitely played for it,” Agar said.

“It was a tough, brutal game, it was what we expected. Wigan have been defending well and points are hard to come by, especially on a cold, damp night. To come to Wigan twice and keep them scoreless shows our guys are pretty invested in each other.

“We defended really well and there were some periods in the second half where we started to control the ball but we looked a little bit fatigued in defence too. We felt pretty comfortable with what they were throwing at us.

“We couldn’t quite finish enough sets well enough and come up with a consistent enough kicking game to put Wigan under pressure. But we got a chance and we took it.”

Defeat brought Adrian Lam’s tenure as head coach to an abrupt finish, and signalled the end of the Wigan careers of Oliver Gildart and Jackson Hastings as they prepare to head off to the NRL with Wests Tigers.

“I’m absolutely gutted, the dressing room is devastated,” Lam said. “I don’t know what I’m going to do tomorrow because it wasn’t in the plan.

“I’ve spent a big chunk of my life in Wigan, I absolutely love the place and I’ve had a great ride. I leave with some wonderful memories and I think the club is in a pretty good place. We have players leaving too, which is more important than me.

“We had an opportunity to finish on a fairy-tale, but we didn’t get into our rhythm. We defended pretty tough, but we didn’t really attack the way we trained. It’s been a bit like that all year with all the changes we’ve had to make.

“I couldn’t ask more from them – they were gutsy and that’s the way it ends sometimes.”