Home World What’s next for Evergrande: Bailout, breakup or default? 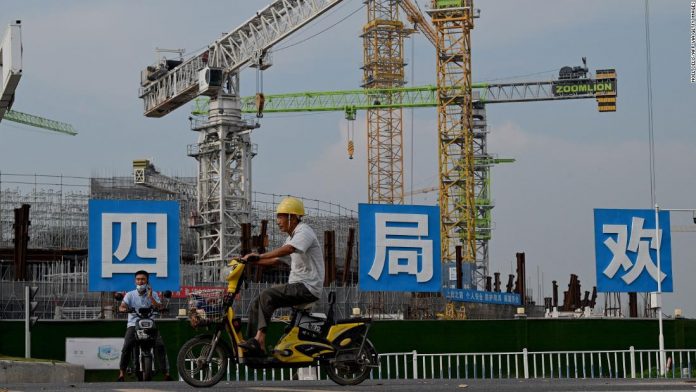 Investors may have to wait a while longer to find out whether Evergrande will default on its enormous debts — it now has a grace period of up to 30 days on the first bond payment. A second payment of $47.5 million on another bond is due next week.
Evergrande’s stock plunged nearly 12% Friday in Hong Kong, reversing a recovery it staged the previous day on news that the company would pay interest on another bond issued in yuan to mainland Chinese investors. So far this year, the shares have plunged 80%.
Filling the vacuum of information is mounting speculation that the Chinese government will have to intervene to limit the fallout that would be caused by the collapse of one of the country’s biggest real estate conglomerates.
Beijing has few good choices. It will want to protect thousands of Chinese people who have bought unfinished apartments, construction workers, suppliers and small investors, as well as limiting the risk of other real estate firms going under. At the same time, it has been trying for at least a year to rein in excessive borrowing by developers and won’t want to dilute that message.
Speculation about one option — an effective nationalization of the company — was stoked Thursday after a regional financial news website, Asia Markets, reported the Chinese government was finalizing a deal to restructure Evergrande with the backing of state-owned enterprises (SOEs).
Citing anonymous sources close to the Chinese government, it said the plan would see Evergrande broken up into three separate entities, and the restructuring could be announced within days.
Neither Evergrande nor China’s top regulator for SOEs responded to requests from CNN Business for comment on the article.
But analysts are already weighing up the possibility of Evergrande being nationalized.
“Most likely the government has to [inject capital into] Evergrande so that it can continue construction and then sell residential property units to get cash to repay debts,” said Iris Pang, chief economist for Greater China for ING. “With government capital, it is likely that Evergrande could become [a] SOE or become part of the SOEs that could inject capital in Evergrande, ” she added.

Good news in the short term?

That would be good news for Evergrande, financial markets and the economy in the near term. The company is buckling under the weight of about $300 billion in total liabilities, and some analysts fear a disorderly collapse could spark China’s “Lehman Bros” moment by sending shocks through the financial system and economy. Real estate and related industries account for about 30% of Chinese GDP.
For Evergrande, becoming a SOE would help it restore confidence among home buyers, said Stephen Cheung and Calvin Leung, equity analysts for Jefferies in Hong Kong, in a research report. The company has sold 200,000 housing units that have not yet been handed over to buyers, according to recent analysis from Bank of America.
The move would also “alleviate near-term liquidity pressure” for the company, while making it easier to carry out a debt restructuring with domestic and overseas bondholders, they said.
Moreover, it would give the Chinese government even greater control over the vast property market. Six of the country’s top 10 property developers are SOEs or backed by state investors. Evergrande would become the seventh.

‘End of the beginning?’

But even if Evergrande is nationalized, longer term concerns about China’s property slowdown will likely persist. And that’s a bigger risk to the Chinese economy in the medium term.
According to the National Bureau of Statistics, housing sales plunged nearly 20% in August from a year ago — the biggest decline since February 2020, when China locked down cities and imposed drastic measures to contain the coronavirus. Property investment rose by just 0.3%, compared with 1.4% in July, marking a sixth straight month of slowing growth.
“Demand for newly built urban housing is now entering an era of protracted structural decline,” said Julian Evans-Pritchard, senior China economist for Capital Economics, on Thursday.
Demand for housing is easing for a number of reasons. The number of marriages has plunged 40% since 2013, reducing the demand from newlywed couples. And urban population growth has slowed.
It means “developers will be competing over a shrinking pie,” Evans-Pritchard said.
“The environment for developers will get a lot more challenging. Evergrande’s collapse marks the end of the beginning of the squeeze facing China’s property sector rather than the beginning of the end,” he added.
Taking control of Evergrande would also fit a recent pattern of greater intervention in the Chinese economy. Beijing has been cracking down on private enterprise, from tech companies to private tuition and even social media influencers, while trying to cool the overheated real estate sector.
Pang from ING believes the government’s crackdown on property and other industries could harm the economy.
“Recent government policies do not aim to squeeze companies into debt troubles. But I agree that there are too many policies coming out in a short period of time. Policy risks are rising and could hurt employees, and therefore consumption,” she said.
— CNN’s Beijing bureau contributed to this report.