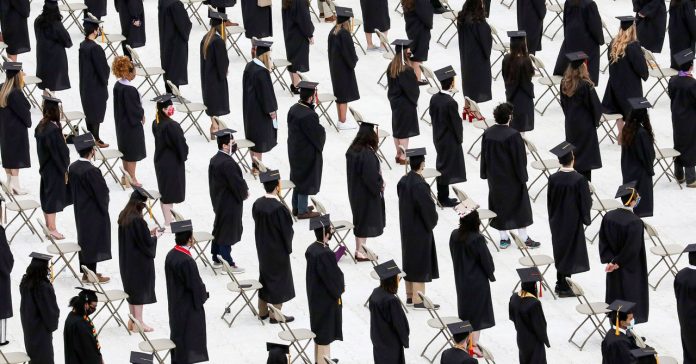 “I had zero clubs in college. I couldn’t afford the time to go to them. I had to make money,” says Miranda, who is now 25. If he had been able to fit one in, he couldn’t have afforded to take an internship. “Even paid internships don’t pay very well,” he says.

“I didn’t realize how many people were setting themselves up for success way before graduation,” Miranda says. “Me and my friends were so late to the party.”

By comparison, he says, “People who have parents who went to college, they know stuff. First-generation college students have no idea what happens after college. Like, what do you do? I didn’t know how to network or who to network with. I didn’t have anybody.”

Miranda landed a job as an operations manager at an Amazon fulfillment center, starting on a career path he says he hopes will eventually lead him into sales. (Braven does not have any particular relationship with Amazon.)

Even such small things as a handshake can trip up some college graduates, says Waintraub Stafford of NASPA. “If you’ve never been in an environment that has taught you the traditional meaning of a handshake as it relates to the corporate world, that’s going to be a glaring experience for you and for the person you’re meeting,” she says.

A very small number of colleges and universities are recognizing the unique problems first-generation students face in finding their first jobs after graduation and are adding programs to help them.

UC Berkeley now offers career counseling specifically for first-generation and low-income students, including résumé reviews, help with LinkedIn profiles, and a semester-long jobs course. The University of Toledo hosts a networking series to help such students connect with employers and alumni and an internship preparation program to teach them résumé writing, networking, and other skills.

When a student considers a job or internship for which they’re overqualified, “We’ll say, ‘No. You have earned the right to compete.’ ”

“It’s kind of scary to admit that you don’t know” how to get a job after college, Mojarro says. It’s also stressful. “Their parents get them really excited about being a college student, and that can be intimidating, too, that all of this is on them.”

A few nonprofits, such as Braven—which brings its career courses to universities and community colleges that have large proportions of first-generation and low-income students—are also teaming up with colleges to offer this kind of support.

Aimée Eubanks Davis, Braven’s founder and CEO, was working in New Orleans as a school teacher whose students were largely first generation and low income when she realized the need for such help.

“I was watching my students progress out of college and being horrified where they were landing,” Davis says. Though they’d earned the same credentials as their peers — often working much harder to do it — they were missing out on the “almost invisible set of advantages” that exist for students whose parents are college educated and well connected.

Braven matches students with coaches who work for participating companies. “Often that coach is the first person those students know in the professional workforce,” Davis says.

Although it covers everything from what to wear to an interview to when to send a thank-you note, the Braven approach is largely about building confidence, she says. “A lot of it has to do often with the narrative and the story they’ve been told externally.” The students are reminded that “their experiences in life, even if tough and clunky and imperfect, are actually what makes them truly great and truly resilient.”