Home World 5 things to know about the Evergrande crisis: A simple breakdown 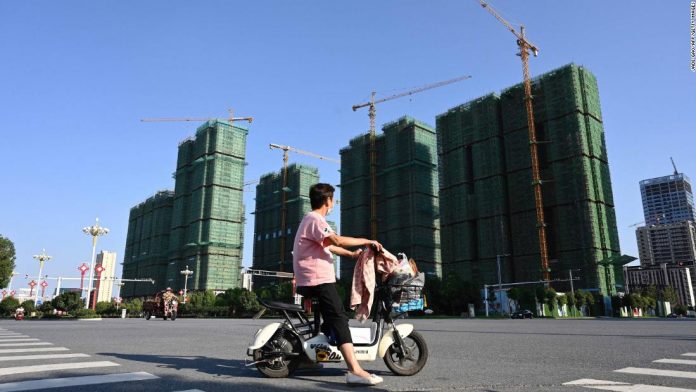 The property developer’s debt crisis is a major test for Beijing. Some analysts fear it could even turn into China’s Lehman Brothers moment, sending shockwaves across the world’s second biggest economy. Real estate — and related industries — account for as much as 30% of Chinese GDP.
This week, investors experienced whiplash as the firm met one crucial debt deadline, but then failed to address another. Shares shot up one day, and down the next.
The coming days and weeks will be critical. While Evergrande has a grace period of up to 30 days on an interest payment of nearly $84 million that was due Thursday, it’s supposed to make a payment on another bond next week.
That’s fueling speculation over what could happen next, with potential outcomes including a Beijing-backed bailout, restructuring or default.
Here’s what you need to know about Evergrande, and how it got to where it is now.

Evergrande is one of China’s largest real estate developers. The company is part of the Global 500 — meaning that it’s also one of the world’s biggest businesses by revenue.
Listed in Hong Kong and based in the southern Chinese city of Shenzhen, it employs about 200,000 people. It also indirectly helps sustain more than 3.8 million jobs each year.
The group was founded by Chinese billionaire Xu Jiayin, also known as Hui Ka Yan in Cantonese, who was once the country’s richest man.
Evergrande made its name in residential property — it boasts that it “owns more than 1,300 projects in more than 280 cities” across China — but its interests extend far beyond that.
Outside housing, the group has invested in electric vehicles, sports and theme parks. It even owns a food and beverage business, selling bottled water, groceries, dairy products and other goods across China.
In 2010, the company bought a soccer team, which is now known as Guangzhou Evergrande. That team has since built what is believed to be the world’s biggest soccer school, at a cost of $185 million to Evergrande.
Guangzhou Evergrande continues to reach for new records: It’s currently working on creating the world’s biggest soccer stadium, assuming that construction is completed next year as expected. The $1.7 billion site is shaped as a giant lotus flower, and will eventually be able to seat 100,000 spectators.
Evergrande also caters to tourists through its theme park division, Evergrande Fairyland. Its claim to fame is a massive undertaking called Ocean Flower Island in Hainan, the tropical province in China commonly referred to as the “Chinese Hawaii.”
The project includes an artificial island with malls, museums and amusement parks. According to the group’s most recent annual report, it started taking customers on a trial basis earlier this year, with plans for a full opening “at the end of 2021.”

How did it run into trouble?

In recent years, Evergrande’s debts ballooned as it borrowed to finance its various pursuits.
The group has gained infamy for becoming China’s most indebted developer, with more than $300 billion worth of liabilities. Over the last few weeks, it’s warned investors of cash flow issues, saying that it could default if it’s unable to raise money quickly.
That warning was underscored this month, when Evergrande disclosed in a stock exchange filing that it was having trouble finding buyers for some of its assets.
In some ways, the company’s aggressive ambitions are what landed it in hot water, according to experts. The group “strayed far from its core business, which is part of how it got into this mess,” said Mattie Bekink, China director of the Economist Intelligence Unit.
Goldman Sachs analysts say the company’s structure has also made it “difficult to ascertain a more precise picture of [its] recovery.” In a recent note, they pointed to “the complexity of Evergrande Group, and the lack of sufficient information on the company’s assets and liabilities.”
But the group’s struggles are also emblematic of underlying risks in China.
“The story of Evergrande is the story of the deep [and] structural challenges to China’s economy related to debt,” said Bekink.
The issue isn’t entirely new. Last year, a slew of Chinese state-owned companies defaulted on their loans, raising fears about China’s reliance on debt-fueled investments to support growth.
And in 2018, billionaire Wang Jianlin was forced to downsize his conglomerate, Dalian Wanda, as Beijing clamped down on firms borrowing heavily to push overseas.
In a recent note, Mark Williams, Capital Economics’ chief Asia economist, said that Evergrande’s collapse “would be the biggest test that China’s financial system has faced in years.”
“The root of Evergrande’s troubles — and those of other highly-leveraged developers — is that residential property demand in China is entering an era of sustained decline,” he wrote. “Evergrande’s ongoing collapse has focused attention on the impact a wave of property developer defaults would have on China’s growth.”

How is it trying to move forward?

Evergrande said Wednesday in a filing with the Shenzhen Stock Exchange that issues regarding a payment on a domestic yuan bond have been “settled through negotiations.” The amount of interest it owed on the bond is about 232 million yuan ($36 million), according to data from Refinitiv.
While the news may placate investors, many questions still remain unanswered. Evergrande did not elaborate on the terms of the payment in its statement, and interest worth $83.5 million on a dollar-denominated bond also fell due Thursday. That deadline came and went without an update from the company.
On September 14, Evergrande announced that it had brought on financial advisers to help assess the situation.
While those firms are tasked with exploring “all feasible solutions” as quickly as possible, Evergrande has cautioned that nothing is guaranteed.
So far, the conglomerate has struggled to stem the bleeding, and has failed to find buyers for parts of its electric vehicle and property services businesses.
As of that filing, it had made “no material progress” in its search for investors, and “it is uncertain as to whether the group will be able to consummate any such sale,” it said.
The company has also been trying to sell off its office tower in Hong Kong, which it bought for about $1.6 billion in 2015. But that has “not been completed within the expected timetable,” it said.

How are investors reacting?

Evergrande’s problems spilled onto the streets this month when protests broke out at its headquarters in Shenzhen. Footage from Reuters showed scores of demonstrators at the site last week, accosting someone identified to be a company representative.
But shareholders have been wary for months: The stock has shed nearly 85% of its value this year.
Earlier this month, Fitch and Moody’s Investors Services both downgraded Evergrande’s credit ratings, citing its liquidity issues. “We view a default of some kind as probable,” Fitch wrote in a recent note.
The situation also appears to be spooking investors in China more broadly, at a time when they’re already reeling from Beijing’s crackdown on private sector companies, particularly in the tech sector. Stocks in Hong Kong, New York and other major markets have been swayed by fears of contagion from Evergrande and a slowdown in Chinese growth.
“In our opinion, how Evergrande credit stresses will be resolved will drive market sentiment,” Goldman Sachs analysts wrote recently, referring to the credit market and the broader economy. They added that the Chinese bond market could be hit and a loss of confidence could “spill over to the broader property sector.”

What could happen next?

The Chinese government appears to be starting to intervene.
Over the past few days, the People’s Bank of China has injected some cash into the financial system, to help boost liquidity in the short term and settle nerves.
According to Bloomberg, the net injection for banks was 460 billion yuan ($71 billion) sometime this week, including 70 billion yuan ($10.8 billion) on Friday.
Authorities are clearly watching closely, while attempting to project calm.
Last week, Fu Linghui, a spokesperson for China’s National Bureau of Statistics, acknowledged the difficulties of “some large real estate companies,” according to state media.
Without naming Evergrande directly, Fu said that China’s real estate market had remained stable this year but the impact of recent events “on the development of the whole industry needs to be observed.”
Last week, Bloomberg also cited anonymous sources as saying that regulators had enlisted international law firm King & Wood Mallesons, among other advisers, to examine the conglomerate’s finances. King & Wood Mallesons declined to comment.
According to the report, officials in Evergrande’s home province of Guangdong have already rejected a bailout request from its founder. Guangdong authorities and Evergrande did not respond to a request for comment.
Beijing has few good choices. It will want to protect the thousands of Chinese people who have bought unfinished apartments, as well as construction workers, suppliers and small investors.
Authorities will also likely aim to limit the risk of other real estate firms going under. But at the same time, they have long been trying to rein in excessive borrowing by developers — and won’t want to dilute that message.
Even with cash infusions, some suggest it may already be too late to save the company.
Evergrande’s financial problems have been widely dubbed by Chinese media as “a huge black hole,” implying that no amount of money can resolve the issue.
“China has really been trying to clean up its bad corporate debt for years. And although they made some progress before the pandemic, the task often seems interminable, and that’s what you’re certainly seeing here,” said Bekink.
“The impacts from a large default by Evergrande would be remarkable.”
— Kristie Lu Stout, Julia Horowitz, Laura He and CNN’s Beijing bureau contributed to this report.

Does the Vaccine Cut Your Risk of Getting Long COVID?

London has more statues of animals than it does of women and people of color, a new study says