Home Sport Mercedes surge forward, Verstappen consigned to the back 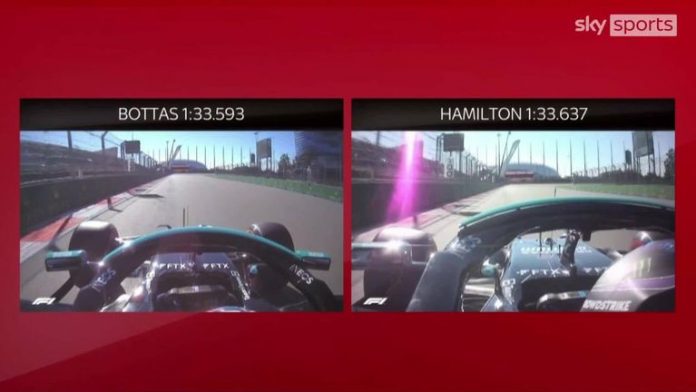 Perfect start to Sochi weekend for Mercedes as Valtteri Bottas leads another one-two ahead of Lewis Hamilton; Max Verstappen only sixth, and he will start Sunday’s race at the back as Red Bull take new engine; Antonio Giovinazzi brings out red flag with crash

Mercedes hold all the early momentum at the Russian GP after Valtteri Bottas secured another one-two ahead of Lewis Hamilton in second practice, while championship leader Max Verstappen’s new engine and back-of-the-grid start for Sunday’s race was confirmed.

Red Bull had been deliberating over whether or not to take a Sochi engine penalty on top of Verstappen’s three-place grid penalty for his Italian GP crash with Hamilton – and opted to pull the trigger by fitting him with a fourth Honda Power Unit for Friday’s afternoon session.

News of his back-of-the-grid start was then confirmed during Practice Two, just as Mercedes stamped home their early advantage around a Sochi circuit where they have won every race since 2014.

Bottas, just like P1, was the fastest Silver Arrow, although this time only 0.044s ahead of Mercedes’ number 44 Hamilton, who has a great chance to take back the title lead this weekend with Verstappen on the back foot.

Verstappen was an alarming 1s adrift on the qualifying simulations, before Antonio Giovinazzi brought out a red flag during the long runs by spinning and crashing his Alfa Romeo into the barriers at Turn 8.

To add more intrigue to a news-heavy weekend, there are expected to be heavy downpours throughout Saturday’s qualifying day, with the shootout set to be live on Sky Sports F1 at 1pm.

F1 are keeping a keen eye on the forecast in case the session needs to be moved, and if it can’t take place at all the grid for Sunday would be set by the final order in second practice.

Mercedes therefore are in the perfect position, although they were challenged closely in P2 by Pierre Gasly in the AlphaTauri.

Gasly was just 0.2s adrift, with Lando Norris and Esteban Ocon the next closest challengers.

Sergio Perez finished down in 11th in the Red Bull, who will be relying on the Mexican to perform come Sunday with Verstappen consigned to the back.

Verstappen taking a fourth engine of the season – one more than is permitted in the regulations – was always likely after his Power Unit was damaged beyond repair in his crash with Hamilton back at Silverstone.

And Russia appeared to be an ideal location to take the hit, with its overtaking-friendly circuit and the fact Verstappen was going to be starting three places lower than his qualifying position anyway.

But Red Bull had previously said that they would wait until after qualifying to make the call on a new engine. Perhaps Mercedes’ big advantage, and the weather forecast, made their decision for them.

“I think it will be a bit difficult to cut through,” said Verstappen, who will start at the back along with Ferrari’s Charles Leclerc. “But we had to take a penalty anyway and if we hadn’t taken it here we’d have to take it somewhere else so we thought we’ll decide to do it here and try and make the best of it.

“We just try to make the best possible race car for this weekend.”

Hamilton said his rival’s penalty was a “shame” but added: “We’ve got to try and capitalise on that and try to maximise our result. A one-two would be spectacular for us as a team.”

And a one-two certainly appears achievable for a Mercedes team who haven’t had one all season, particularly with Bottas showing stronger form than Hamilton, let alone Red Bull’s second driver Perez.

“It can always go better but if you look at the timings and based on the feelings it was a good day,” said Bottas.

The one big unknown for the weekend is the weather; F1 has never had a wet session at the Sochi Autodrom since its debut seven years ago.