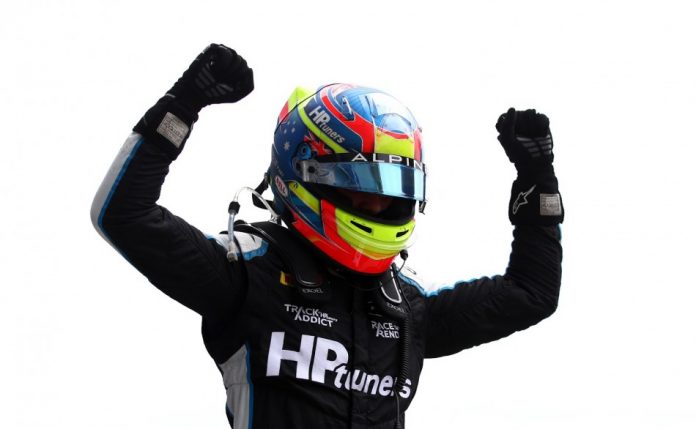 Oscar Piastri took his second consecutive Feature Race win and extended his lead in the Drivers’ standings with a commanding drive at the Sochi Autodrom. The Australian headed Théo Pourchaire across the line, with Jehan Daruvala occupying the final spot on the podium.

Starting from pole position, Piastri retained his position at the head of the field at the start of the race, while Pourchaire moved ahead of Daruvala for second place at Turn 2. A fast-starting Ralph Boschung progressed into the top three, while championship-contending Guanyu Zhou slipped from fourth to eighth.

Piastri and Pourchaire slowly pulled away from the rest of the pack throughout the 28 laps, with Pourchaire briefly moving ahead of Piastri when he pitted one lap later than the PREMA driver. However, with his hot tyres, Piastri regained the net lead, which he did not concede for the remainder of the event.

Late drama for Boschung saw him retire, after being in contention for the podium for much of the race. With Daruvala third, local favourite Robert Shwartzman was fourth, ahead of Saturday’s Sprint Race victor Dan Ticktum.

21 cars lined up on the starting grid, with Felipe Drugovich ruled unfit to participate following his crash prior to the commencement of Saturday’s race. At the front, Zhou endured a difficult start and dropped four positions, while Daruvala slipped from second to fourth having been overtaken by Pourchaire and Daruvala.

Further back, Bent Viscaal was forced to retire for the second race in a row following contact with Roy Nissany – Nissany would later receive a five-second time penalty for the incident.

A brief Virtual Safety Car was deployed, with Lirim Zendeli peeling into the pits to replace his front wing, which had been stripped from his car on the opening lap.

When the action resumed, Marcus Armstrong and Liam Lawson battled for 12th, with the latter attempting the alternate strategy by starting on the medium tyres compared to those on the Super Softs around him.

Pourchaire sat just over one second behind Piastri in the fight for the lead, but was unable to make a push into DRS range. Jüri Vips became the second driver to retire as his car slowed on Lap 6 – he returned to the pits, but was forced to park up his car due to an issue.

Boschung became the first of the front-runners to pit for medium tyres, while Jake Hughes, who starred for HWA RACELAB on Saturday, began to struggle. He dropped behind Christian Lundgaard and Ticktum and would eventually finish at the back of the pack following a spin later in the race.

Prior to his one and only pit stop of the race, Ticktum displayed strong speed on his worn Super Softs, overtaking Lundgaard and Zhou in consecutive laps before pitting.

Back up at the front, Piastri opted to come in for a tyre change on Lap 9, while Pourchaire stayed out for an extra lap. The ART Grand Prix driver was called in on the following lap and emerged back onto the track ahead of Piastri – it appeared as though the team’s overcut attempt had been successful.

However, with tyres that were already up to temperature, Piastri drew alongside Pourchaire and got back ahead into Turn 5, taking the net lead. There were a handful of cars ahead of the duo, however they were all running the alternative strategy and yet to pit.

Over the following seven laps, Piastri and Pourchaire navigated their way through those who had yet to make a move into their pit boxes, with Piastri managing to stay out in front all the way to the chequered flag. Behind them, a battle was underway for the final position on the podium.

Boschung held third but was under pressure from Daruvala. In the Turn 13 braking zone on lap 22, Boschung had a sizeable lock-up and ran deep into the corner, allowing Daruvala to sweep through to take his fourth podium of the 2021 season.

Shwartzman also passed Boschung with relative ease after the Campos Racing driver’s error, as Ticktum, Zhou and Lawson closed in from behind. Boschung’s race was soon run, as his lock-up proved to be too much for the front left tyre. He suffered a puncture on the run into Turn 2 and was left with no choice but to park his car trackside and retire.

Shwartzman couldn’t close in on Daruvala in time to challenge for a podium position and settled for fourth, ahead of Ticktum and Zhou.

Lawson was the highest placed driver on the alternate strategy in seventh with the fastest lap, while MP Motorsport’s Richard Verschoor finished in eighth place for the second time this weekend.

Lundgaard was ninth for ART, while David Beckmann benefited from Boschung’s late retirement to move up into 10th and secure the final point on offer.

“Another Feature Race win – two in a row! I am very happy with that, it was a very tough race with no Safety Cars. Théo (Pourchaire) was pushing me the whole way.

“I’m glad I could hold on, I could keep the gap at one and a half, two seconds. I was pushing the whole way. I’m very happy I could pull that one off after a bit of a disappointing day yesterday.”

Piastri extends his championship lead and sits on 178 points, ahead of Zhou who has 142 to his name. Shwartzman is third on 135, with Ticktum and Pourchaire in fourth and fifth with 129 and 120 points respectively.

In the Teams’ fight, PREMA sits out in front on 313 points, leading Carlin with 225. Third in the order with 201 points is UNI-Virtuosi, while Hitech Grand Prix is fourth on 182 with ART Grand Prix fifth with 163 points.