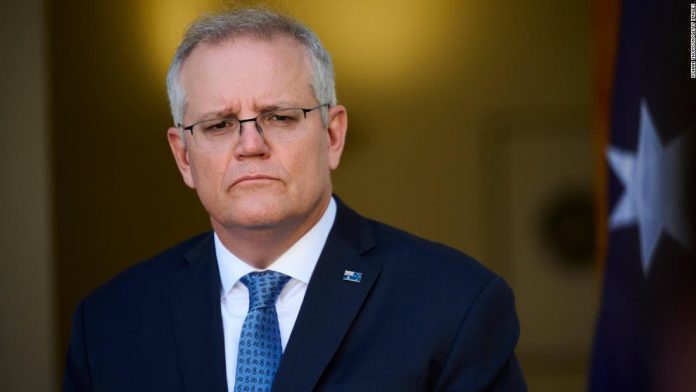 More than 100 world leaders, including US President Joe Biden, have confirmed their attendance at the talks hosted by the United Kingdom, a close ally of Australia. Leaders of the G20, which includes Australia, will be convening in Rome a day ahead of the climate talks. While it is not yet confirmed if Morrison will be at that summit, many G20 leaders are likely to take the short flight from the Italian capital to COP26 in Scotland.
“We haven’t made any final decisions about (attending COP26). I mean it is another trip overseas and I’ve been on several this year and spent a lot of time in quarantine,” Morrison told the West Australian newspaper.
Morrison said he needed to focus on the country’s reopening after an extended lockdown. His government is aiming to relax its hardline border restrictions in December.
“Australia will be opening up around that time, there will be a lot of issues to manage and I have to manage those competing demands,” he said.
The Prime Minister made his comments as Australia comes under pressure from allies, including the United States, to announce more ambitious pledges on the climate crisis. The country is the world’s second-biggest exporter of coal and the Morrison government has said it will continue to mine, export and use the fossil fuel well beyond 2030.
Leaders including COP26 President Alok Sharma and UN Secretary-General António Guterres have called on the developed world to end the use of coal by the end of this decade.
Morrison’s office did not immediately respond to CNN’s questions on the Prime Minister’s plans for COP26.
“I am bringing the Government and I hope the country together on where we are seeking to go and we are working though our commitments, we are working through our plans … a plan gives people certainty about the big change that will occur over the next 20-30 years,” Morrison told the West Australian.
The Australian government has been promising a new long-term emissions plan ahead of the talks for months. Morrison made no announcements on any new plans on Friday when he addressed the UN General Assembly in New York in a pre-recorded video. He has said that the country’s plan will focus on “tech not taxes.”
Australia is one of just a handful of countries that did not increase its target to reduce greenhouse gas emissions when registering its official update on its climate plans to the UN last year. It sent its update on December 31 with little fanfare, keeping its target to a 26-28% reduction in greenhouse gas emissions by 2030, from 2005 levels.
The Australian Climate Council, which is independent of the government, has suggested the country should slash emissions by 75% by 2030, compared to 2005 levels, to do its part in containing global warming to 1.5 degrees. More than 190 countries signed up to the Paris Agreement in 2015, in which they committed to trying to contain global warming to 2 degrees, but preferably 1.5 degrees, above pre-industrial levels to stave off the more catastrophic impacts of the climate crisis.
Australia’s target sits well below those made by the US, European Union and UK, among other developed nations.

Speaking to Australia’s ABC radio on Monday, Australian Foreign Minister Marise Payne confirmed “no final decision has been made” on whether Morrison would attend the talks or whether she would stand in his place, but said Australia “will be strongly represented” at COP26 “no matter which senior Australian representative” attends.
“One thing we are absolutely committed to, as we have said, is setting out our long-term emissions reduction plan prior to the COP and that is what we are focused on as a government,” Payne said in the interview.
Australia is becoming increasingly isolated on the world stage because of its climate failings.
US officials pressed Australian ministers on their country’s climate record at a recent defense meeting in Washington, mentioning the “urgency” of the “climate crisis” in a communiqué that Morrison signed.
Members of the EU Parliament have told CNN in recent weeks that Australia has one of the worst climate records of all developed nations and some expressed incredulity when it emerged that Australian negotiators had pressured the UK into dropping key climate commitments from their bilateral trade agreement.
And comments from Australia’s resources minister Keith Pitt dismissing the UN as a “foreign body” that should stay out of Australia’s affairs has only worsened the country’s image as an uncooperative player in climate action.
COP26 comes at a crucial time for the world’s efforts on the climate crisis. A state-of-the-science report published by the UN in August showed that the world is warming faster than scientists previously thought, and that slashing greenhouse gas emissions by at least half this decade is crucial to staving off the more catastrophic impacts of climate change.
Australia is already experiencing more heat extremes and higher sea level rises than the global average because of the crisis. Heat, sea level rise and drought are all projected to increase in Australia the more the Earth warms, the report found.

CNN’s Ivana Kottasová and Chandler Thornton contributed to this report.