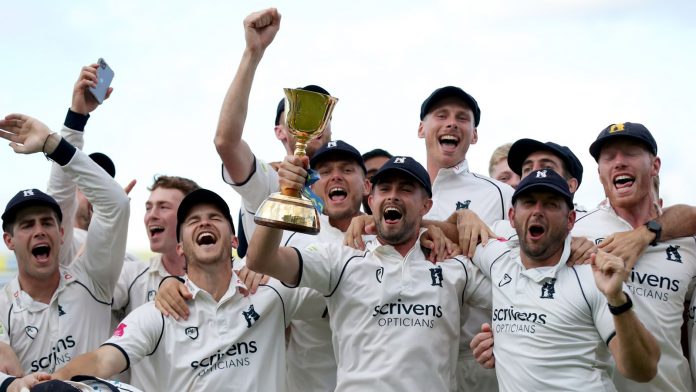 County champions Warwickshire take on Lancashire in the Bob Willis Trophy final at Lord’s as the English cricketing summer comes to an end; can the Bears make it a double or will the Red Rose have their revenge? Watch day one from 10.15am, Tuesday on Sky Sports Cricket

The cricketing summer comes to an end this week and there could be no more fitting conclusion than two top sides battling it out for a trophy at Lord’s.

Having pipped Lancashire to the title in a dramatic conclusion to the County Championship season, Warwickshire have the chance to double down in the Bob Willis Trophy final, live on Sky Sports Cricket.

For the Red Rose, the five-day contest at the home of cricket represents a shot at revenge after moving to the brink of becoming County Champions for the first time in 10 years with a nerve-shredding victory over fellow title rivals Hampshire, only to see Warwickshire blow Somerset away the following day and take the crown.

Lancashire will be without a number of key players for the final with opener Keaton Jennings (calf) and fast bowler Saqib Mahmood (side) out injured and batting all-rounder Liam Livingstone away at the IPL. Young wicketkeeper George Lavelle (thumb) also misses out.

James Anderson featured early in the season – taking 11 wickets at just 7.54 – but England’s record wicket-taker will not take part with both he and Jos Buttler resting before a busy winter of international cricket.

In the absence of both Anderson and Mahmood, Tom Bailey will continue to lead the attack as he had done so impressively for much of the season, taking his 50 wickets at 16.86 in the Championship while leg-spinner Matt Parkinson could have a big role to play if the pitch takes spin.

The loss of Jennings hands even greater responsibility to fellow opener Alex Davies in his final match for his home county before his move to… Warwickshire.

The wicketkeeper-batsman has made six fifties in red-ball cricket this summer but is yet to reach three figures. Could he sign off in style against his soon-to-be employers?

Will Alex Davies have a bigger impact with the bat or gloves in the #BWTFinal? 🌹 pic.twitter.com/sTP5kvkIg9

Josh Bohannon, 24, has led the way for Lancashire with the bat this season, averaging 53.31 with two hundreds, while skipper Dane Vilas showed his importance with the match-winning knock under pressure against Hampshire last week.

Warwickshire must also do without an England star with Chris Woakes rested ahead of the T20 World Cup and the Ashes having played a key part over the past two games as the Bears claimed their eighth County Championship triumph.

With Woakes absent, it will be back over to Liam Norwell – 49 wickets at 18.26 – and Craig Miles – 37 wickets at 21.81 – to spearhead the seam attack with Danny Briggs the main threat should spin play a part.

In terms of average, there has been no huge standout for the Bears but while he averages just 37.76, opener Rob Yates has shown that when he gets in, he goes big, with four hundreds to his name this season.

It means so much to so many! 💙

Sam Hain is Warwickshire’s leading run-scorer in the County Championship with 826 and despite losing his place in the England Test side, it is worth remembering that Dom Sibley has been prolific in county cricket in recent years and will be hoping to push his case for an international recall in his last match before the Ashes squad is announced.

Watch day one of the Bob Willis Trophy final between Warwickshire and Lancashire from 10.15am, Tuesday on Sky Sports Cricket.