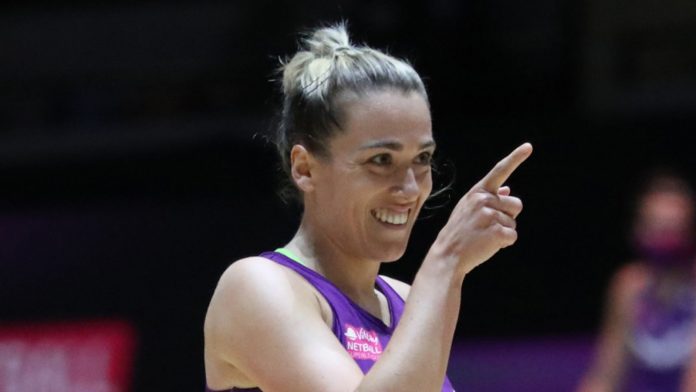 Sara Francis-Bayman’s team, who had fallen at the last hurdle three times previously in 2008, 2017 and 2018, overcame Team Bath Netball in the 2021 Grand Final to end a 15-year wait for a first Superleague title.

Panagarry, who led from the front throughout the season and on the final weekend, cannot wait for her sixth season with Lightning.

“The culture, the players and staff at Loughborough have helped me grow and learn so much, and I still want to do that and keep doing that,” she said.

“I think people expect me to move back up north every year, but right now it just feels right for me to still be here at Lightning.

“I can’t wait to get back going with the girls and get on court. I’m excited to see how we approach the season and handle the pressure that comes with being Superleague winners.”

Hannah Joseph, ladies and gentlemen.@LboroLightning’s WA showing us all how it’s done.

Joseph, whose performances during the 2021 season inspired a call up from the England Roses head coach, spent the latter part of September on tour in New Zealand. Now, she’s keen to show that Lightning can win after winning.

“Being able to learn from the coaches we have at Loughborough and retaining the bulk of the squad was a key factor for me.

“We want to not let last year’s win be a one off, we want to be that side that does it back-to-back and are real contenders year in, year out.”

The 2021 Grand Final was emotional for all Lightning players, especially for Cobden following the injuries she’d suffered and come back from.

Throughout the season, Cobden got better by the minute, and like her team-mates, she’s ready for more.

“The environment at Loughborough is great, we’re so lucky and it’s so enjoyable to be there. I think we’ve relieved some of the pressure on us now, we lost two finals in a row, and the pressure was building on us to get over the line.

“Now we’ve won, and got Loughborough their first title we know we can do it. We can take confidence from it and it’s going to be an exciting year to build as a squad.”

What an inspiration @BethCobs1 is to us all.

Finally, duel international Clark is excited for the “new challenges” that come with defending a title.

“It was crucial that we kept the core of the title-winning team together,” head coach Sara Francis-Bayman said.

“These four players epitomise the growth of the team over the last six years. They were important for us last year and will be again this season as they bring back more international experience with them.”

Prior to the signing window closing on October 15, a further 11 players will be revealed. After that, the British Fast5 All-Star Championship is around the corner and Loughborough are also the defending champions for it.