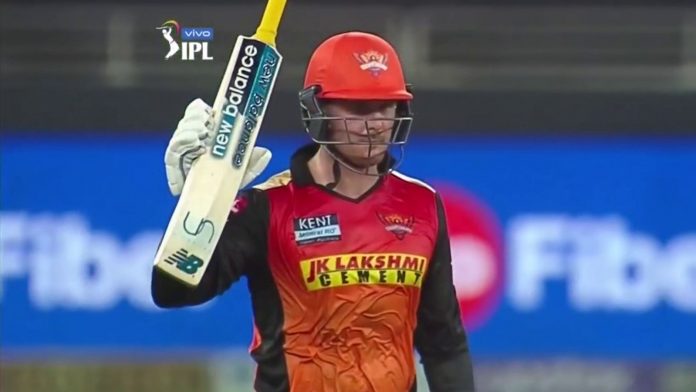 Sunrisers Hyderabad beat Rajasthan Royals by seven wickets to claim just their second win of IPL 2021; Jason Roy scored 60 from 42 balls on his Sunrisers debut and Kane Williamson made 51no from 41 balls as they chased down 165 with nine balls to spare

Jason Roy scored a half-century on his Sunrisers Hyderabad debut to take the Indian Premier League’s bottom side to victory and dent Rajasthan Royals’ play-off hopes.

The win was just the Sunrisers’ second in this year’s tournament and Roy’s introduction came as one of four changes to the team after defeat to Punjab Kings confirmed they could not make the knockout stages.

Those changes worked as they chased down 165 for victory with Roy (60 from 42 balls) making his mark at the top of the order and captain Kane Williamson hitting an unbeaten 51 from 41 balls to get them home with nine balls to spare.

Sanju Samson was in sparkling form again, making 82 from 57 balls in Rajasthan’s 164-5, but for the second game running his efforts proved in vain as the Royals missed the chance to move into the top four.

Rajasthan lost opener Evin Lewis early after choosing to bat first but a second-wicket stand of 56 between Yashasvi Jaiswal (36 from 23) and Samson helped established a solid platform.

However, the momentum was slowed after a mid-innings stumble with Jaiswal bowled by Sandeep Sharma (1-30) and Liam Livingstone (4) holing out as he tried to punish a short ball from Rashid Khan (1-31).

Samson got the Royals back on track in the second half of the innings as he continued his stunning run in this year’s IPL, taking 20 off one Siddarth Kaul over and thumping seven fours and three sixes in total before falling to the same bowler in the last over as Sunrisers’ bowlers finished strong.

Sanju Samson is at it again for #RR – hammering Rashid Khan into the stands for six! #SRH #IPL2021

The pressure was on Roy as the start of the chase having come in to replace Sunrisers stalwart David Warner, who has struggled for runs throughout the competition, but he was able to ease himself into the innings thanks to a rapid start from Wriddhiman Saha.

The Englishman soon got into his stride though and the partnership had reached 57 by the time Saha (18 from 11) was stumped off the bowling of Mahipal Lomror (1-22).

Williamson joined Roy at the crease and over the next seven overs, the duo took the game away from Rajasthan as they put too on 57.

Roy was the chief aggressor, reaching his half-century from 36 balls with a huge slog-sweep for six followed by a more controlled sweep for four, while Williamson – having shown his timing with an incredible shot off the back foot that carried all the way for six over long off – ensured the scoreboard kept ticking over.

What a knock from the England man on his #SRH opener – goes to fifty from 36 balls with a six and a four! #IPL2021

Roy’s innings came to an end when he tickled one behind down the legside off Chetan Sakariya (1-32) and although Priyam Garg (0) fell to Mustafizur Rahman (1-26) in the next over, there was no panic from the Sunrisers with Williamson still at the crease.

The New Zealand skipper has earned his reputation as the personification of calm and he lived up to it again here, with the help of Abhishek Sharma (21no from 16) coolly taking his side to within sight of victory before ensuring there could be no last over drama with back-to-back boundaries in the 19th over to seal the win.

Sunrisers remain bottom of the table despite the win while the Royals stay sixth, level on points with Kolkata Knight Riders in fourth.

The IPL action continues on Tuesday as Kolkata Knight Riders take on Delhi Capitals. Watch live on Sky Sports Cricket from 10.50am.