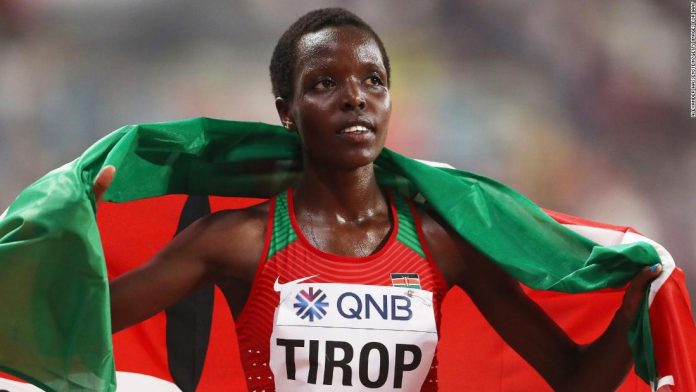 “Suspected killer husband of Agnes Tirop, the long distance runner heroine recently murdered at her home, has been arrested,” the National Police Service-Kenya said in a statement on Twitter on Friday.
“The suspect, one Ibrahim Kipkemoi Rotich, who has been on the run with police on hot trail, was nabbed in Mombasa by diligent police detectives,” read the statement.
The NPS said Rotich is being held at Changamwe Police Station and was “awaiting transfer to Iten where he’s expected to face prosecution.”
The NPS added that Rotich was arrested along with another suspect, Silas Chilla Chellile, and that both individuals were helping the police with their investigations.
Rotich was arrested on Thursday in Changamwe, Mombasa county, as he “tried to flee a neighboring country to evade justice,” the Directorate of Criminal Investigations-Kenya said in a statement on Twitter.
“Earlier in the day [Thursday] at around noon, Rotich had rammed his getaway vehicle into a lorry at Athi River, along Mombasa road, as he desperately escaped out dragnet,” said the DCI.
Tirop won bronze medals in the 10,000m at the 2017 and 2019 World Championships and finished 4th in the 5,000m at the Tokyo Games.
Last month, the 25-year-old made history by taking 28 seconds off the long-standing, women-only world record for 10km at the Adizero Road To Records event in Germany.
Tirop finished in a time of 30:01, breaking the previous record of 30:29, which had been set by Moroccan Asmae Leghzaoui in 2002.
Following the race, she said, “I’m so happy to have broken the world record. I felt the pace was good. The course was very good, too.”
At the 2015 IAAF World Cross Country Championships, Tirop became the second-youngest ever gold medalist in the women’s race after Zola Budd.
Athletics Kenya said the country had “lost a jewel who was one of the fastest-rising athletics giants on the international stage, thanks to her eye-catching performances.”