Home Lifestyle The Best Shearling Jackets Are Worth the Investment 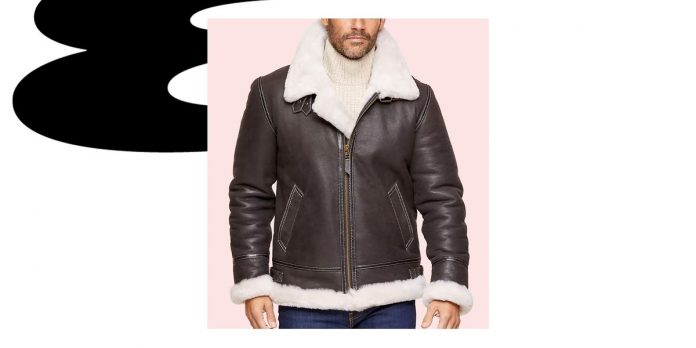 It was 2002 when I came across an of the best shearling jacket I had ever seen—even until today, almost two decades later. I forget where exactly I discovered it, but the beige suede aviator with a pronounced collar and pockets, worn over a simple white V-neck tee and roomy cream-colored trousers, has stuck with me. It was a runway look from Gucci, then designed by Tom Ford, when the brand was unabashedly sexy.

Sexy: The word that perfectly describes a shearling jacket, particularly if it’s an aviator. When done correctly, the style has presence and commands a room. It beckons passersby to stop, stare, and, on occasion, blush. Ford, perhaps more than most, understands its ability to allure; since leaving Gucci and starting his own label, he usually presents at least one in his seasonal collections. It makes sense when you discover that the man is a Texan—one who owns a ranch, no less. He’s a cowboy, so he gets how durable and insulating the material can be. But he also has the panache and swagger of James Bond, which means anything less than sexy just doesn’t suffice. And it doesn’t get any sexier than that combo, fellas.

Ford, of course, isn’t the only designer that’s a fan. Rick Owens, the chiseled lord of darkness, constantly reinvents the biker jacket, using shearling to bolster the drama of his collections. Balmain’s Olivier Rousteing and Saint Laurent’s Anthony Vacarello have also put forward eye-catching designs, combining the sheared lambswool with corduroy, PVC leather, or denim. And burgeoning names, like Ambush’s Yoon Ahn and Bianca Saunders, have done wonders with bright colors, proportions, or a combination of both. But if tradition is what you’re after, the folks at Overland and Schott and Levi’s constantly offer up the real deal.

It is important to note that most shearling jackets and coats cost a pretty penny—even if they’re lined with sherpa. Yes, there are very good affordable options, but in regards to this category, you’re gonna have to open up your wallet wide to get the look of an authentic cowboy 007. But when you do, rest assured that, with a description like that, you’ll make hearts flutter.

A shearling biker jacket, albeit faux, for 70 bucks? Indeed, there should be no gray area (aside from the stonewash hue, of course) about copping this bad boy.

A shearling bomber jacket primed for strutting down a city street. But that’s to be expected from a brand with the Big Apple in its name.

For fits that imbue the rugged, brawny vibe of the Great Outdoors (but with a streetwise bent), Overland is the name to know. The brand continuously offers a full range of shearling jackets and coats, with this detachable-hooded style being tops.

A biker or bomber is what’s to be expected of shearling. But leave to the always forward-thinking folks at The Arrivals to offer a parka. Fitted and hooded, this suede number is the rare bird of the bunch.

Todd Snyder gets a lot of love from us. But when he consistently offers the kind of items that make us salivate—like this tall drink of water, made of British lambskin, dyed the perfect shade of olive—it’s impossible not to shower him with praise.

Slim fits with a retro flare are at their peak when Saint Laurent is on the label. I mean, it has done wonders by combining two normally bulky fabrics—corduroy and shearling—and serving the essence of a ‘6os rock god.

Bianca Saunders is climbing the ranks of the fashion industry, offering designs that play with proportions to really stunning effect. Case in point: this shearling-lined leather jacket that raises the bar in more ways than one.

Acne’s selection of leather aviator jackets have been making the rounds with the street-style set for years. And it has achieved this by offering sleek silhouettes with striking details that are picture perfect. Get ready to accrue record-breaking “likes” with this topper.

Schott’s been making its shearling toppers for about as long as the style’s been around, which means that Coach understood the assignment. And this coat, with its marbled shearling lining and piping, gets a solid A.

Olivier Rousteing has transformed Balmain into his : a man into super-fitted silhouettes with biker details and lots of hardware. But he never fails to nod to the brand’s eponymous founder, who grew up in the small Alpine village of Saint Jean de Maurienne. Which is why shearling—in this case, splashed across the oversized lapels—seldom fails to be part of the designer’s collection.

Expect Ambush’s Yoon Ahn to always add a surprising element to tried-and-true styles. The designer never fails to bring an edge, whether that comes in the form of hardware or silhouettes that are both sleek and pronounced. These details are already attributed to aviator jackets, so Ahn has cast an unexpected color that’s right on the money.

Rick Owens, king of the underground, offers a shearling-lined leather jacket that is as brutalist as the art style it is named after.

It’s all there in the intro, folks.

The next iPhone SE: 5G upgrade could be Apple’s first release of 2022

Monterey’s best feature still hasn’t arrived. Will it be worth the wait?