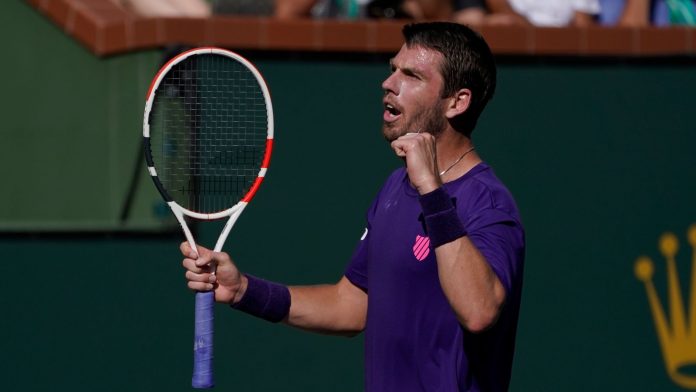 Cameron Norrie’s sensational year has another first after a brilliant 6-2 6-4 victory over Grigor Dimitrov took the Brit into his first Masters-level final at the BNP Paribas Open Indian Wells.

The 26-year-old made short work of Dimitrov – who had accounted for US Open champion Daniil Medvedev in the last 16 – with a brisk straight-sets victory that took him into a final showdown with either Nikoloz Basilashvili or Taylor Fritz.

Norrie dismantled 11th seed Diego Schwartzman to reach the last four, a win that guaranteed he would replace Dan Evans as the British No 1 and his run to the final in the Californian desert means he will rise to at least 17 in the updated rankings on Monday.

More importantly, Norrie is now just one match win away from the second, and biggest, title of his career, coming just three months after his first in Los Cabos in July. His final on Sunday night will follow the women’s final between Paula Badosa and Viktoria Azarenka.

“The match against Diego gave me a lot of confidence and to do it in that fashion, so I felt really good and really comfortable coming out today,” Norrie told Amazon Prime after reaching an ATP-Tour leading sixth final of the season, level with Novak Djokovic.

“I came out the exact same way, really physical, a lot of balls in the court and I was able to dictate with my forehand and pin him to the backhand side. I’m becoming more and more comfortable in Indian Wells.

“Biggest win of my career for sure, he made it difficult in the second set, he was slicing a lot and taking my legs away a little bit too but I managed to serve well in those games and get through them and I think it frustrated him a little bit so I think I had a really good game plan.”

After racing through the first set in just over half an hour, Norrie – the highest-ranked player in the field after surprise exits for Medvedev, Stefanos Tsitsipas and Alexander Zverev, among others – was forced to work harder in the second set before eventually accounting for the three-time Grand Slam semi-finalist in 96 minutes.

Leading by a set, Norrie broke early in the second and looked set to be cruising into the final, but Dimitrov dug deep and having come from a set and two breaks down against Medvedev, hinted at another comeback when he threatened to break straight back.

But Norrie has shown an ability to go deep and has proved to be a physical match for almost everyone else on tour this year and having fended off Dimitrov to lead 3-1, shared the next six games to get across the finish line in style.

Norrie is the first British player to reach the final at one of the ATP’s elite Masters events since Andy Murray in Paris in 2016, and as well as the title, the British No 1 ranking and a place in the world’s top 20, Norrie is within touching distance of a place in the elite eight-man end-of-season ATP Finals in Turin.

After another impressive victory, he will likely start as the favourite against whoever emerges from the other semi-final, either the world no 39 Fritz or world no 36 Basilashvili.