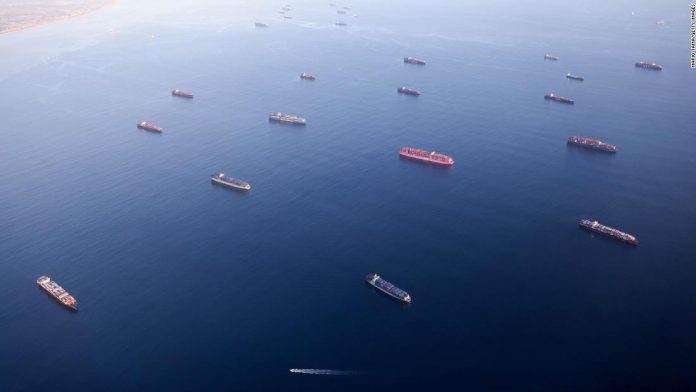 The end-of-year holiday shopping rush was quickly approaching, but Foreman was struggling to book shipping containers to ferry the company’s toys, which include Tonka trucks, Care Bears and Cutetitos. And when he did find some, the costs were exorbitant.
In a normal year, Basic Fun, based in Boca Raton, Florida, can export everything its customers order from its factories in China. “It’s automatic,” Foreman said. The company can “set it and forget it.”
But not this year. Not in a year in which 20-foot and 40-foot shipping containers became scarce and more expensive to deliver goods from factories overseas to US ports and back. The spot rate of booking a 40-foot container from Shanghai to Los Angeles hit $10,229 the first week of August, up 238% from the same time a year prior, according to Drewry, a maritime research consultancy.
So Foreman had to make a decision about which toys Basic Fun would focus on sending stores for the holidays. And he had to make it by September, so the goods would arrive in time.
He found an easy answer to a complicated problem: small, squishy toys.
About 85% of the toys sold in the United States are made in China, according to the Toy Association, an industry trade group. Shipping containers in short supply, limited cargo space on ocean vessels, and spiraling costs have forced toy manufacturers to make numerous trade-offs about which merchandise makes the most economic sense to ship this holiday.
One solution to the container constraints, say toy manufacturers, stores and analysts: exporting additional smaller units and pulling back on larger-sized ones.
“Companies have to think about how they make the most of each cube of space in a container,” said David Garfield, head of the consumer products practice at consulting firm AlixPartners. Toy manufacturers have retooled packaging to optimize space and ship more products per container, he said. In some cases, that has meant shrinking the actual packaging sizes. In others, it involves limiting extra accessories in the box to keep packages lighter.
Basic Fun can fit $150,000 worth of Mash’ems — soft, squishy, water-filled collectibles with characters like Spider Man, Disney Princess and Harry Potter — into a container and $100,000 worth of Cutetitos, little furry stuffed animals wrapped in a burrito-like blanket.
“It’s a simple case of how much sales volume fits in the container when containers are hard to come by,” Foreman said, adding that with these smaller toys, “the packages are the size of a golf ball.”
On the flip side, Basic Fun can only pile $40,000 worth of Tonka Trucks and $80,000 worth of Care Bears into containers. So Basic Fun limited the amount of Tonka Trucks and Care Bear animals it shipped, instead of raising prices to offset its higher costs.
“I’d rather sell fewer trucks and not have to raise the price exponentially because I’ll sell trucks again next year,” he said.

Other toymakers are making similar decisions.
Yogibo, which sells toys, home decor and bedding, decided to prioritize shipping small items like Squeezibo, a gel fidget ball, and Mates — small, cuddly stuffed animals — instead of blankets and pillows “as they take up much less space and offer a higher value for the same amount of volume,” said CEO Eyal Levy.
In a 40-foot container, Yogibo can fit 200,000 Squeezibo units — $1.6 million worth of sales—and 15,000 Mates worth $400,000. But just 2,500 blankets worth $200,000 in sales fit in a container.
The company, which is based in Nashua, New Hampshire, and sells at its own retail stores, Amazon and specialty retailers, made the decision to focus on shipping these smaller items in mid-September, after struggling to procure containers.
“Once we realized containers were getting delayed week after week, we started the prioritization process,” Levy said. “We were running out of time.”
This year, toymaker WowWee sent more of its My Squishy Little Dumplings — bite-sized dumplings that make popping sounds that kids can squeeze and toss around— and its Got2Glow Fairy Finder, a jar with 30 virtual fairies, to retailers such as Amazon, Walmart and Target.
“Cargo and containers are at a premium, so we’re going to prioritize high-velocity, small items,” said Andrew Yanofsky, head of marketing and operations at the Hong Kong-based company. He estimates that $245,000 worth of the dumplings go in a 40-foot container and $535,000 worth of Got2Glow jars can be shipped.
The company pulled back on shipping Pop2Play, a pop-up playset slide. Only $61,000 worth of slides can fit in a container, Yanofsky said.
“It’s a great toy and it’s selling well, but the problem is only a couple thousand fit,” he said. “When the margins are low and the footprint is large, items like that are going to get pushed aside.”
The decisions by manufacturers to prioritize smaller toys are trickling down to holiday inventory that’s available for some toy stores.
Rick Derr, owner of Learning Express Toys in Lake Zurich, Illinois, said he began noticing in the spring that smaller, lighter items were in more abundant supply. He has been tapping alternate suppliers to try to fill in gaps on bigger items such as dollhouses, play sets and mazes.
“We’re going to pivot to smaller items” this holiday, he said. “If you sell enough of them you can make up the [sales] that we lose not having the bigger items.” Specifically, Derr expects to be able to sell more small fidget toys, silicone Pop It! toys, small arts and crafts kits, puzzles and card games.
“These are going to be in much better shape this year,” he said. What will be scarcer at his store this holiday: “The bigger items.”

Banning US oil exports would be a ‘gift to OPEC and Putin,’ Big Oil CEO says

Are People More Prone to Supernatural Thinking if They Believe in the Afterlife?

We know who is attacking us and we know how to get even, says Israel’s cyber defense chief