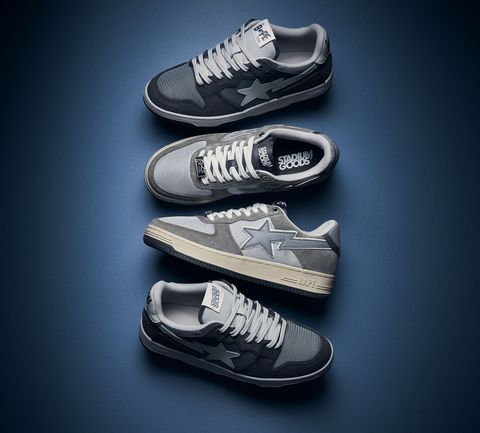 I have a pet theory that a person’s feelings on sneakers are forever informed by the era in which one got into sneakers. Not exactly earth-shattering, I’ll admit, but there’s a twist. I believe that, as often as not, it’s actually an inverse reaction to prevailing market forces. If you decided to delve into the scene when absolutely everyone was wearing Stan Smiths and bona fide sneakerheads were lusting after Phoebe Philo’s Air Force 1 riff for Celine, you might find yourself inexplicably drawn to the weird, wild, and wacky. (Luckily, the market responded in kind with stuff like the Triple S.) And if you, like me, started paying attention in the early-to-mid aughts, when eye-searing color combos from Nike SB reigned supreme, you might find yourself falling pretty hard for knowingly normal styles like New Balance’s 990 series (guilty).

Recently, this little theory led me to a place I didn’t quite expect: ruminating on Bape, more specifically the much-beloved Bape Sta. If you’d asked me a month or two ago how I felt about the style, I would have told you honestly that I wasn’t so sure about it. The smash-hit Bape Sta’s I remember from way back were brazen and bright and fun, but, even in the neon-drunk 2000s, a little loud for my tastes. I realize now, of course, that they weren’t the only ones out there, but they left me feeling a bit burnt on the silhouette as a whole. But then Stadium Good decided to team up with Bape on a pair of sneakers—the AF1-indebted Bape Sta and its cousin, the Dunk-adjacent Sk8 Sta—and forced me to reevaluate my whole position. 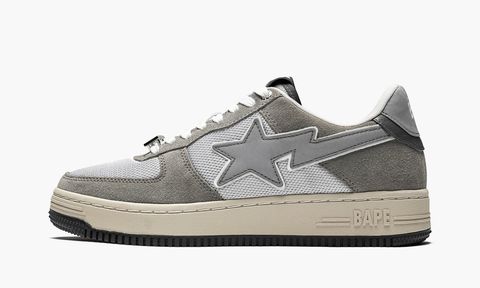 The two new sneakers are done up in shades of gray and slate-y blues laid over panels of suede and mesh. Even with the big star (sorry, “sta”) logo sweeping down the side, they feel a little more relaxed and refined than the primary-colors-and-patent-leather versions from the old days. I mean, they’re still Bape, so they still embody a certain streetwear sensibility cultivated over the last 21 years. But they also feel like they could be a gateway drug, leading hypebeasts into retirement mode or pulling normier sneaker fans towards something a little bolder than their norm. 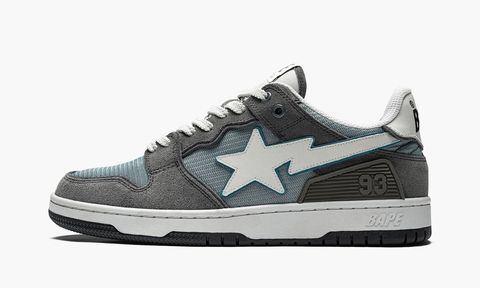 Are these the only Bape sneakers that could achieve that particular feat? Not at all. The reinvigorated lineup announced earlier this year is fuller than I would have expected of toned-down, goes-with-everything colorways. But it just so happened that this collab with one of the juggernauts of the secondhand sneaker game was the one that caught my eye and thawed my cynical heart. It might just do the same for you. And if it does—or if you’re just an avowed Bape fan who thinks I’m boring as fuck (fair)—you’ll be pleased to know that neither shoe has even hit the secondary market yet.

The Stadium Goods Bape Sta in “Lexington Grey” releases Tuesday, October 26 at 12 p.m. eastern time at Stadium Goods’s website. The Sk8 Sta, in “Claremont Blue,” drops on Friday, October 29, in the same spot. Both shoes retail for $315. And both, if you’re anything like me, are liable to make a Bape (or Sk8) Sta fan of you yet.

The next iPhone SE: 5G upgrade could be Apple’s first release of 2022

Monterey’s best feature still hasn’t arrived. Will it be worth the wait?