Home Lifestyle Denim from a Sweats King, a Red-Hot Jacket, and More of This... 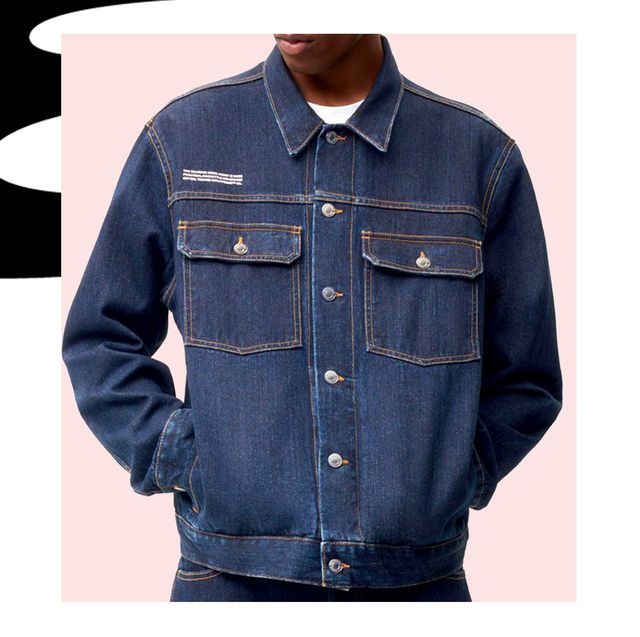 I currently have Dune playing in the background, the third time I have watched it since six o’clock this morning. I’ve been waiting with bated breath for this film to debut, and since I’m an early riser, I just didn’t feel the need to wait any longer. My verdict, if you didn’t already guess from the amount of views? It’s fabulous. The story, the cinematography, the pacing: all of it is sublime. But I really didn’t expect anything less from director Denis Villeneuve.

His flick, though, isn’t the only stellar release this week. Pangaia dropped its first denim line, and the jean jacket, in particular, is beautiful. Louis Vuitton has a bright and bold collection that’ll have Judy Garland singing. Timex and Carhartt WIP came out with a watch that is equal parts dope and durable. 18 East and Standard Issue are at it again. And there’s a new fragrance that gives a whole new meaning to an airy scent. And like Dune, all are available now, and worth revisiting several times over.

Timex and Carhartt WIP: Two brands that exemplify timeless, utilitarian style. And for its latest collab, the iconic duo has released the Range C Allied Chronograph, a watch that lives up to their respective reputations. Along with the the striking orange stripes reminiscent of safety signs, it is water resistant up to 100 meters and features a Indiglo backlight for added functionality.

True to its name, Social Goods works hard to enact change for the better. Its 1973 collection, for example, not only highlights the landmark Roe vs. Wade case, but gives back to the National Institute to Reproductive Health to protect women’s rights .

Pangaia, the brand behind some of our favorite sustainably made sweats, has ventured into the great blue yonder, also known as the world of denim. And to make sure its foray into the category is up to snuff, the brand enlisted Jonathan Cheung, formally of Levi’s, to design products that are sleek, but also keeps to eco-conscious. The result is a collection of jeans and jackets made of organic cotton and wild Himalayan nettle.

An airy scent, indeed. Air Company—a label that manufactures products using a patented technology that mimics photosynthesis, transforming carbon dioxide into ethanol—has released the first fragrance made from air. Called Air Eau de Parfum, the genderless product features top notes made orange peel and fig leaf; mid notes made out of jasmine, violet, azalea, and sweet water; and base layers made of powdery musk and tobacco.

For his latest capsule collection at Louis Vuitton, called “A Piece of the Rainbow,” Virgil Abloh is taking us back in time, with two stops on the route. The first is in 2018, when he presented his first collection for the maison, which was chock full of bold, sporty fits in a spectrum of hues. The second is to 1939, when a young Judy Garland sang a song that made us dream bigger and brighter.

Ghurka is on a roll. Along with debuting its No.4 collection a few weeks back, the brand has just dropped the Harlow II. It is the latest design by the company’s freshly minted creative director, John Truex, and one that definitely upholds the standards that fans of the luggage label love. Coming in either black or brown leather, the crossbody bag is is simple in silhouette, but mighty in functionality and durability.

Fear of God’s Jerry Lorenzo is one stylish fella. He makes his own clothes, obviously, but when it comes to specs, he reaches for Barton Perreira. For their latest collaboration, both labels have introduced new colors to the FGBP frame, which keeps to the subdued, refined aesthetic of Lorenzo.

The temperatures have dropped, and here to offer fits for the chilly atmosphere is Reebok. The activewear brand has released Thermowarm + Graphene, a collection of hoodies, pants, and zip-up jackets that are as spiffy as they are sporty.

The NBA season has officially opened this week, folks, and its time to pick your champion. Born x Raised has clearly picked its squad, collaborating with the L.A. Lakers on a collection of hoodies, caps, and sweatshirts that feature the team’s logo and colors done in an airbrush style.

18 East has dropped its latest collection, which includes a slew of lightweight corduroy pieces, hand-dyed indigo khadi workwear, shirt jackers, bucket hats, and more. And back by popular demand are the Standard Issue Gorecki cargos, this time in a princely purple that the brand calls acai.

When news broke that Pyer Moss’s Kerby Jean-Raymond was becoming the vice president of creative direction at Reebok, the Internet was all aflutter. And even more wings will be flapping now that a new riff on the Experiment 4 has dropped, one that stays to true to Jean-Raymond’s love of sports cars.

For many of us, when it comes to working out and going to the gym, the word redux is definitely apt. Taking this sentiment to heart are the folks at Stuart & Lau, who have a released the niftiest gym bag around in their new Tokyo collection. Completely waterproof and featuring a number of hidden pockets and compartments, this carryall will definitely help you get back on the treadmill.

Garrett Leight, a brand deeply inspired by the West Coast, has ventured a bit further inland. The eyeglass company has joined forces with Pendleton, a label that offers styles that cull from the motifs of the Southwest, resulting in collection of blankets and cases that meet in the middle.

Vault by Vans and Haven are back at it again. For their third collaboration, the two companies have revisited the Lampin VLT LX, a sneaker from the ’90s that is updated with an eye-catching, water-resistant, hairy suede upper.

A brown fleece jacket built for cold expeditions, but with the kind of fine details (like yellow patches and zippers) that make it chic enough for an outing in the city.

On their own, New Zealand’s Icebreaker and Japan’s Goldwin make the kind of outwear that is beloved by their respective nations. But now that they have joined forces, expect global dominance.

This drone is the perfect way to make holiday hearts soar!

Get a fast, safe Wi-Fi connection with this security router

Read This Before Your First Professional Wax

What Your Sunglasses Say About You