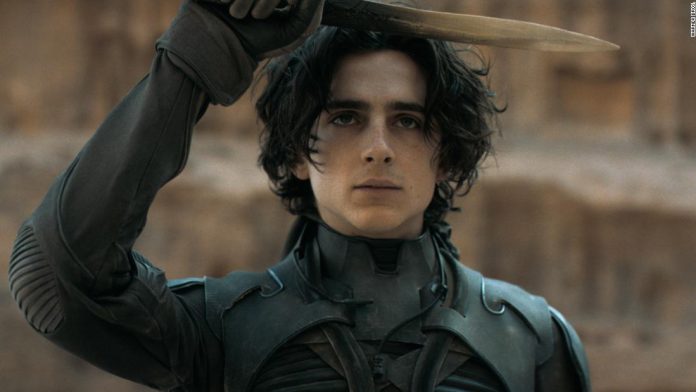 What with all the focus on medicine, research and technology at the moment, why shouldn’t that flow over into our viewing habits, right?
Well, if we are talking sci-fi that leads us right into what to watch this week.

Hollywood seems determined to keep doing “Dune” until it gets it right.
The franchise, spawned by the 1965 novel by Frank Herbert of the same name, includes film adaptations, TV shows, graphic novels, comics and video games.
This time around, it’s a movie starring an ensemble cast that includes Timothée Chalamet, Zendaya and Josh Brolin, among others, about a hero’s journey “to the most dangerous planet in the universe to ensure the future of his family and his people.”
It’s in theaters and streaming on HBO Max (which, like CNN, is part of WarnerMedia) at 6 p.m. ET Thursday.
Who better to get to play members of a ’90s girl group looking to make a comeback than Brandy, Eve and Naturi Naughton?
All three of them had success in the music industry during that time period and they star, along with Nadine Velazquez, as a crew trying to get the band back together as they chase fame and fortune again.
Queens airs Tuesdays on ABC and is streaming on the network’s site.
‘The Next Thing You Eat’
Chef David Chang and Oscar-winning documentary filmmaker Morgan Neville teamed up for this six-episode docuseries that explores how we may eat in the future.
They cover a lot of ground — including robots, insect farms, and the role artificial intelligence may play in what ends up on our plates one day.
It’s currently streaming on Hulu.

Wow. Duran Duran is 40 years old.
With that, it makes sense that the band’s 15th studio album is titled “Future Past.”
Like so many other projects, this one had a delayed release because of the pandemic.
“We’re super excited about releasing the album. It’s been a while in the making,” keyboardist Nick Rhodes told the Evening Standard.
The new album drops Friday.
Twitter is kind of obsessed with Lana Del Rey.
You need only to hashtag her name to see how much she is loved over on the social media platform — and now her fans have something to be excited about.
Her latest, “Blue Banisters,” is her eighth studio album and comes on the heels of March’s “Chemtrails Over the Country Club.”
“Blue Banisters” is out Friday.

Please stay together forever, Blake Lively and Ryan Reynolds.
Because the way this celebrity couple trolls each other makes us fall in love all over again, every time.
Reynolds recently celebrated working with Will Farrell and Octavia Spencer in their upcoming Christmas musical movie, “Spirited,” and announced he’ll be taking a little break from acting.
“Perfect time for a little sabbatical from movie making,” Reynolds wrote in an Instagram post. “I’m gonna miss every second working with this obscenely gifted group of creators and artists. These days, kindness matters as much as talent. I’ve been lucky to work with folks who are flush with both.”
Lively was right there to tease he husband in the comments.
“Michael Caine did it first,” she wrote, referencing recent news the legendary actor was retiring from acting, which he has since clarified as not the case.
Lively and Reynolds are well known for trolling each other, so whatever keeps the spark going.

Imagine if so much of your life and how you were treated was based on how you look.
If you are a woman, that’s not very difficult to envision.
That’s why, I believe, a recent New York Times piece on Linda Evangelista has resonated so strongly.
It looks at the former supermodel’s lawsuit over a cosmetic procedure she says has left her “disfigured” and examines how we view beauty and devalue women as they age.
As I said in last week’s Pop Life Pop Off! episode, female celebrities are expected to always be gorgeous and provide the world something beautiful to look at:
Such pressure, be it on a star or a civilian, is entirely too much.