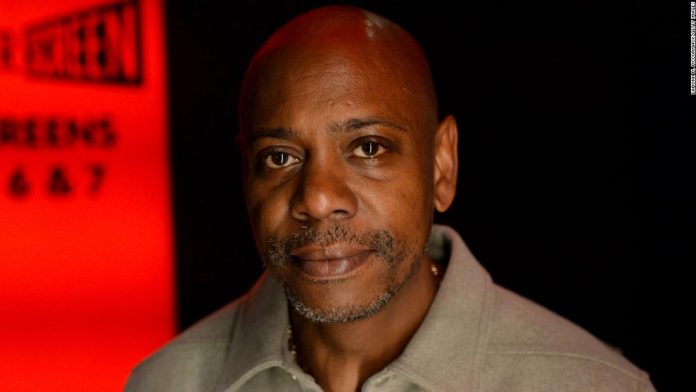 He’ll meet with “the transgender community” that takes issue with his jokes about trans people, he told audiences at a gig in Nashville on Sunday — but is “not bending to anybody’s demands,” he said in videos posted to his verfied Instagram account.
Chappelle, who appeared in Nashville alongside Joe Rogan, who’s been criticized for dismissing the effectiveness of vaccines, and other comedians, shared a section of his set in which he asked audiences if he’s “canceled or not?”
“It’s been said in the press that I was invited to speak with transgender employees at Netflix and I refused,” Chappelle said at the beginning of the five-minute clip. “That is not true. If they had invited me I would’ve accepted, although I am confused about what we’re speaking about.
“I said what I said and boy, I heard what you said,” he continued, apparently addressing trans employees at Netflix, some of whom participated in a walkout last week after the company continued to defend “The Closer.” “My god, how could I not? You said you wanted a safe working environment at Netflix. Well, it seems like I’m the only one who can’t go to the office anymore.”
“I want everyone in this audience to know that even though the media frames it as though it’s me versus that community, that’s not what it is. Do not blame the LBGTQ [sic] community for any of this s—. This has nothing to do with them. It’s about corporate interest and what I can say and what I cannot say.”
“For the record — and I need you to know this — everyone I know from that community has been nothing but loving and supportive. So I don’t know what all this nonsense is about.”
In “The Closer,” Chappelle joked about trans women’s genitalia and TERFs (or trans-exclusionary radical feminists), among other topics. Trans comedians told CNN earlier this month they felt that the comments were an example of “punching down” on those with less power and a betrayal of the astute social commentary for which Chappelle is known.
In his Nashville set, Chappelle went on to discuss the series of comedy shows he staged in small-town Ohio in the summer of 2020, some of which were filmed for an upcoming documentary. But because of the criticism surrounding “The Closer,” Chappelle told audiences, he has been disinvited from several film festivals and “today, not a film company, not a movie studio, not a film festival … will touch this film.”
“Thank God for Ted Sarandos at Netflix,” he told the audience of the company’s co-CEO. “He’s the only one that didn’t cancel me yet.”
“To the transgender community, I am more than willing to give you an audience,” he said. “But you will not summon me. I am not bending to anybody’s demands.”
Chappelle said he has three conditions for those who want to meet with him: “You must come to a place of my choosing, at a time of my choosing. And thirdly, you must admit that Hannah Gadsby is not funny.” (Gadsby, a lesbian comedian whose specials “Nanette” and “Douglas” are also streaming on Netflix, criticized Sarandos for standing behind “The Closer” earlier this month.)
“You cannot have this conversation and exclude my voice from it. That is only fair,” Chappelle said. “You have to answer the question — am I canceled or not? Now let’s go.”
Chappelle announced that the documentary on his pandemic comedy shows will be released in theaters in 10 cities in the US and Canada throughout November, along with live performances from Chappelle and other guests.

The Escapist Fantasy of NFT Games Is Capitalism

‘See you at Caesars in Vegasss’: Adele announces residency starting in January

Bradley Cooper reveals he was held at knifepoint on NYC subway

‘He’s got the power of Wilder, but with a higher IQ!’