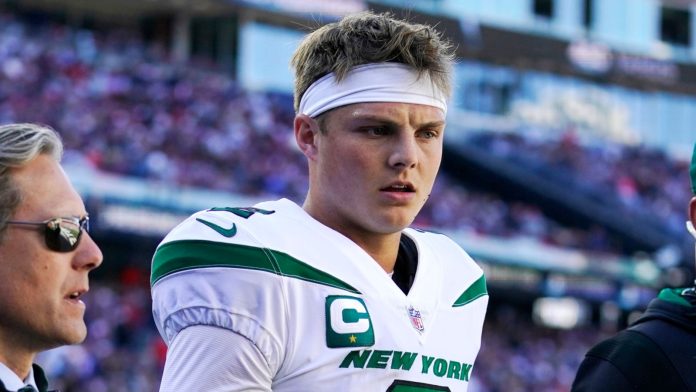 New York Jets quarterback Zach Wilson exited Sunday’s defeat to the New England Patriots after a big hit from linebacker Matthew Judon. The Jets are set to face the high-flying Cincinnati Bengals in Week Eight before visiting the Indianapolis Colts.

New York Jets rookie quarterback Zach Wilson is expected to miss at least the next two weeks due to a knee injury sustained in Sunday’s 54-13 loss to the New England Patriots.

An MRI on Monday morning confirmed that Wilson had suffered a minor PCL sprain, according to NFL Network insider Ian Rapoport.

The No 2 overall Draft pick exited the game in the second quarter following a big hit from Patriots edge rusher Matthew Judon, with Wilson saying afterwards that he heard a “pop” in his knee.

He made it to the medical tent unassisted but was unable to return, finishing six of 10 for 51 yards and one sack as he was replaced by Mike White, who was playing in an NFL game for the first time.

White, a fifth-round draft pick out of Western Kentucky for the Dallas Cowboys in 2018, went 20 of 32 passing for 202 yards, one touchdown and two interceptions.

The Jets (1-5) are scheduled to host the Cincinnati Bengals at MetLife in Week Eight after Zac Taylor’s side delivered a statement victory over the Baltimore Ravens, before visiting the Indianapolis Colts in Week Nine.