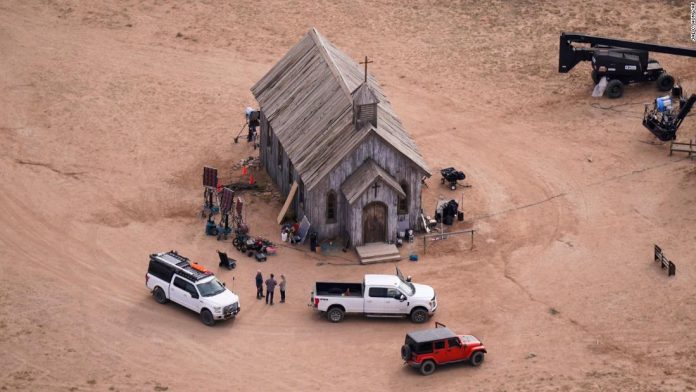 Stu Brumbaugh, the key grip on “The Old Way,” told CNN that Gutierrez handled guns on the set of that project in a reckless manner and that he urged the film’s assistant director to fire her.
“There’s a universal way to handle weapons on set and immediately red flags went up when I worked with Hannah,” Brumbaugh said. “This is why I asked for her dismissal.”
“This is why people get injured because of rookie mistakes,” he said.
CNN has reached out to the film’s production company and the assistant director on the film for comment. CNN has also reached out to Gutierrez.
Brumbaugh cited an incident in which Gutierrez fired a gun near the film’s star Nicolas Cage without warning.
“Make an announcement! You just blew my f***ing eardrums out!” Cage screamed in response and then walked off set angrily, according to Brumbaugh.
“She was talking to the stunt coordinator, and she just fired off a round, it sounded [like she fired] at the ground, and that’s when Nick really laid into her. That’s when I said she needs to be let go, she’s the most inexperienced armorer I had ever worked with. I have no idea why she wasn’t let go.”
CNN has reached out to Cage for comment.
Brumbaugh’s allegations were first reported by The Wrap.
Gutierrez is the daughter of longtime Hollywood armorer, Thell Reed. “Rust” was her second film as an armorer. She said on an episode of The Voices of the West podcast in September that she was “nervous” to work on “The Old Way.”
“I almost didn’t take the job because I wasn’t sure if I was ready, but doing it, like it went really smoothly,” she said during the podcast.
A source who worked on “The Old Way” and requested their name not be included for fear of professional reprisal told CNN they also had concerns about Gutierrez’s work on the project.
“She walked out onto the set with live rounds with no announcement whatsoever to the cast and crew by her,” the source said. “She never announced to anyone that she was walking on the set carrying firearms loaded with blanks with her.”
“She didn’t carry the firearms safely. She had pistols tucked under her armpits and was carrying rifles in each hand that were ready to be used in the scene,” this individual added. “Firearms were aimed at people. She turned around and the pistols that were tucked under her armpits were pointing back at people.”
On Wednesday, the Santa Fe County Sheriff Adan Mendoza said investigators believe the gun fired by “Rust producer and star Alec Baldwin contained a “suspected live round.”
Mendoza said Gutierrez, Baldwin and others on the “Rust” set at the time of the shooting are cooperating with the investigation.
An earlier version of this story used Hannah Gutierrez’s full name, Hannah Reed-Gutierrez. It has been updated to reflect she does not appear to hyphenate her last name professionally.