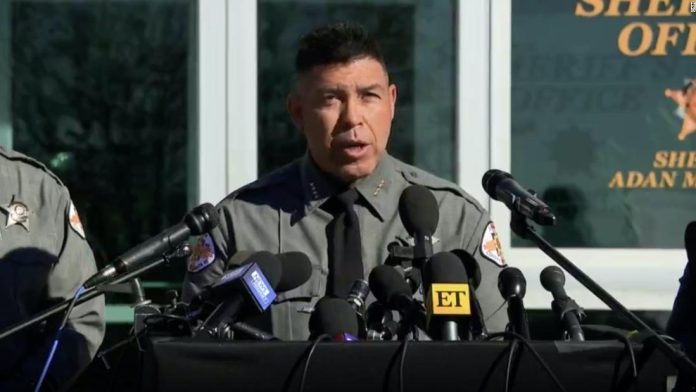 Investigators believe they have recovered the “lead projectile” and shell casing from the ammunition that struck and killed the film’s director of photography, Halyna Hutchins, 42, and injured director Joel Souza.
“The facts are clear: a weapon was handed to Mr. Baldwin. The weapon is functional and fired a live round, killing Ms. Hutchins and injuring Mr. Souza,” Sheriff Adan Mendoza said at a joint press conference between the Sante Fe County Sheriff’s Office and district attorney office.
Approximately 500 rounds of ammunition — a combination of blanks, dummy and live rounds — have been seized from the set, Mendoza said. He said they believe the lead projectile that was fired from the gun was recovered from Souza’s shoulder.
A total of three guns were seized from the proximity of the incident, Mendoza added. In addition to the one believed to have been fired by Baldwin, one was altered and not functioning and the other was plastic.
The evidence will be submitted to the FBI for further processing, he said.
Those who were in close proximity to the shooting have been interviewed and authorities are looking to also continue to interview the more than 100 people who were also present in different parts of the set.
Baldwin, armorer Hannah Gutierrez and assistant director David Halls have been cooperative with investigators, according to Mendoza.

According to an affidavit for a search warrant, Souza said he was shot in the shoulder and Hutchins was killed as Baldwin practiced drawing a prop gun during rehearsal for the Western at the Bonanza Creek Ranch in Santa Fe.
The director told investigators Baldwin was “sitting in a pew in a church building setting, and he was practicing a cross draw,” it is stated in the affidavit. A cross draw is when a shooter pulls the weapon from a holster on the opposite side of the body from the draw hand.
Souza also said Hutchins was “complaining about her stomach and grabbing her midsection” after the shot was fired.
Authorities said on Wednesday that they have recovered some camera footage but believe there is no footage of the actual incident.
As investigators examine what led to the fatal shooting of a cinematographer on the set of ‘Rust,’ the
Santa Fe County district attorney said in an interview with CNN’s Josh Campbell that determining how the gun fired by Baldwin became loaded with suspected live rounds will play a key factor in the decision to bring possible criminal charges in the case.
“We don’t know how those live rounds got there,” the district attorney, Mary Carmack-Altwies told CNN Wednesday. “And I think that that will probably end up being kind of the linchpin for whether a decision is made about charges.”
Carmack-Altwies said any decision to bring charges, she said, could take weeks or months.
“This is a large, complex investigation,” she told CNN.
Carmack-Altwies said that while the case has generated intense attention, she would not make a decision to bring charges due to outside pressure.
“I will not make my decision based on that pressure,” she said. “The decision will be based on the law and the evidence, period.”

An affidavit for a search warrant for the movie set filed by the Santa Fe County Sheriff’s Office and obtained by CNN affiliate KOAT contained information that the assistant director Halls, who handed Baldwin the prop firearm had yelled “cold gun.”
Souza confirmed to investigators that he heard the term “cold gun,” meaning the gun did not have a blank or a live round that contained gunpowder that could explode.
During the investigation, Halls acknowledged to investigators that he did not check all the rounds loaded in the weapon prior to the lethal shooting, a detective wrote in a search warrant affidavit made public Wednesday.
Detective Alexandria Hancock described her interviews with Halls and Gutierrez, saying, “David advised when Hannah showed him the firearm before continuing rehearsal, he could only remember seeing three rounds. He advised he should have checked all of them but didn’t, and couldn’t recall if she spun the drum.”
Investigators added the request to search the van after interviewing several members of the movie crew, including Gutierrez, who told investigators the weapons used in filming were stored in a safe inside the van or “prop truck” to which only a few people had access and the combination.
Though Mendoza said Wednesday a suspected live round killed Hutchins and wounded Souza, Hancock said in the document that Gutierrez told investigators, “No live ammo is ever kept on set.”
“David advised the incident was not a deliberate act,” the detective wrote of the interview with Halls.
According to the affidavit, a van used to store weapons and props on the Santa Fe set of ‘Rust’ was searched for evidence prompted by interviews from the film crew. The van was searched for firearms, ammunition, a gun safe, fingerprints, bodily fluids, and residue, the detective said.
“Hannah advised on the day of the incident, she checked the ‘dummies’ and ensured they were no ‘hot’ rounds,” the warrant states about the ammo used on set. While the firearms were secured inside the van, “ammo was left on a cart on the set, not secured,” Gutierrez told investigators. The grey, two-tier cart also contained a Western-style belt and other prop-ammunition.
Halls was previously accused of a disregard for safety protocols during productions in 2019, two people who worked closely with him told CNN.
Maggie Goll, an IATSE Local 44 prop maker and licensed pyrotechnician, said in a statement to CNN that while working on Hulu’s “Into the Dark” Anthology Series in February and May of 2019, Halls neglected to hold safety meetings and consistently failed to announce the presence of a firearm on set to the crew, as is protocol.
On Wednesday, Mendoza invited those with additional information regarding the set or additional information to contact the Sheriff’s office.
“I think there was some complacency on this set,” he said. “I think there are some safety issues that need to be addressed by the industry and possibly by the state of New Mexico, but I’ll leave that up to the industry and the state to determine what those need to be.”
Halls and Gutierrez have not responded to CNN’s previous requests for comment.

Baldwin was seen looking visibly upset after the shooting on the “Rust” set and said that he was “fully cooperating” with authorities.
“There are no words to convey my shock and sadness regarding the tragic accident that took the life of Halyna Hutchins, a wife, mother and deeply admired colleague of ours,” Baldwin tweeted after the tragedy. “I’m fully cooperating with the police investigation to address how this tragedy occurred and I am in touch with her husband, offering my support to him and his family. My heart is broken for her husband, their son, and all who knew and loved Halyna.”
Hutchins, who was a wife and mother, is being deeply mourned in the Hollywood community and remembered for her kindness.
The incident has also prompted renewed discussions about the use of ammunition on film and television sets.
Over the weekend, at least one television production — ABC’s “The Rookie” — made a change in set procedures around firearms. “The Rookie’s” new policy will mandate the use of airsoft guns, which are replica guns with reduced power that typically fire plastic pellets.
Filmmaker Ava DuVernay said on CNNI’s “Amanpour” that real guns “shouldn’t be on sets” and that “there’s no reason to still be having live ammo on a set.”
DuVernay said she stopped using real guns on set five years ago and that she hopes the tragedy will spur change in the film industry.
“I think you’ll find more crews will say we don’t want it and more directors will say no. And I doubt there’ll be resistance much longer,” DuVernay told Christiane Amanpour. “Unfortunately, the tragedy has put us in a place where, you know, it may help our industry.”