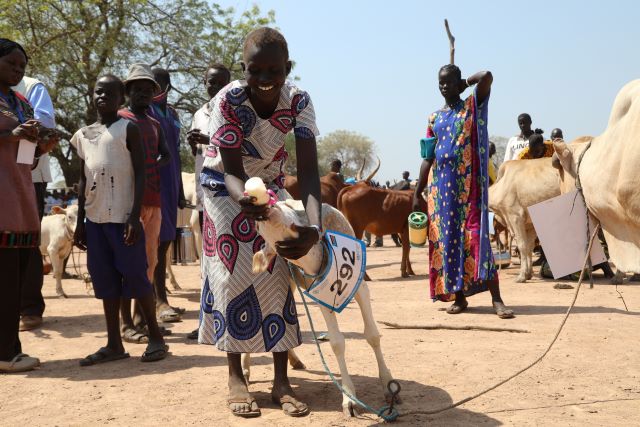 After the suspension of livestock shows due to the pandemic, the Food and Agriculture Organization of the United Nations (FAO) has resumed activities in South Sudan.

With funding from the Government of the Kingdom of Norway and the South Sudan Reconciliation, Stabilization and Resilience Trust Fund (RSRTF), FAO in partnership with the Ministry of Livestock and Fisheries organized a Livestock Show and Agricultural Exhibition in Kuajok on 17 and 18 November. The show brought together Warrap State cattle, goat and sheep owners as well as farmers’ groups who displayed their produce.

FAO introduced livestock shows in South Sudan for the first time in 2019 in Rumbek as a means of promoting peaceful interaction between communities while encouraging the commercialization of livestock by emphasizing quality over quantity. Subsequent shows were held in Wau in 2019 and Torit in 2020. Like the previous events, the FAO Livestock show in Kuajok contributed to boosting the capacity and diversity of the livelihoods of participants, ultimately increasing the resilience of South Sudanese communities.

Livestock keepers gathered at Kuajok Theater with 789 cattle, 135 sheep and 217 goats over the course of the two-day event. Judges trained by FAO were brought from other states to evaluate the animals, not only on the basis of characteristics such as body weight or milk production, but also on aesthetic aspects. The animals with the best traits were awarded prizes ranging from SSP 8 200 (around USD 20) to SSP 32 800 (around USD 80).

FAO’s partner agencies and organizations also set up booths to present their work and activities in support of communities of Warrap State. Groups of farmers displayed their produce to attract potential buyers and raise awareness on the availability of their products in the market.

Unleashing the untapped potential of livestock

Animals are a key economic asset and a central socio-cultural component for the majority of the people of South Sudan. With an estimated 12 million cattle, 12.1 million sheep and 12.4 million goats, the country is one of the world leaders in animal wealth per capita. However, it is estimated that this rich resource contributes only approximately 3 percent of the gross domestic product (GDP) due to inadequate commercialization and marketing.

Through livestock shows, FAO is creating awareness among livestock keepers of the economic value of their animals, thereby encouraging better animal husbandry practices. Furthermore, emphasis on keeping livestock for commercial purposes rather than for prestige and for traditional marriages will discourage cattle raiding and livestock-related violence.

Horn of Africa: Swift aid for drought-affected farmers and herders needed to avoid a hunger crisis

Brave and Bold: All it takes is one story