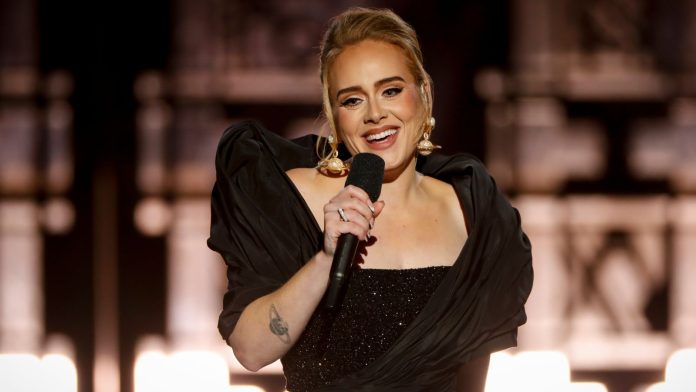 Adele’s album has had the most successful UK chart debut for four years, recording first-week sales of 261,000 and 55.7 million plays across its 12 tracks.

Ed Sheeran’s Divide, in 2017, was the last album to top Adele’s opening for her much-anticipated record, 30.

It’s also the biggest opener for a female solo artist since her last album in 2015.

As well as the 55 million individual song streams this week, 67% of the album sales were physical – 16,700 of them on vinyl.

Adele also dominates the singles chart, with Easy On Me at number one for a sixth week after another 101,000 sales and 11.5 million streams.

That beats her previous record at the top spot of five weeks for Someone Like You.

She’s also straight in at numbers two and four with the tracks Oh My God and I Drink Wine, according to the Official Charts Company.

The rest of the album chart is made up of Ed Sheeran’s Equals at two, Abba’s Voyage at three, Oasis’ live Knebworth record is in at four, and Raise the Roof by Robert Plant and Alison Krauss is another new release at five.

Sheeran is also the only one preventing a top-five lockout for Adele in the singles chart – with Shivers at three and Bad Habits at five.

Adele’s tens of millions of weekly streams gave her the clout this week to force streaming giant Spotify to make a change.

It has stopped automatically shuffling albums after Adele said it was the “only request” she had in the “ever-changing” music industry.

She posted that artists do not “create albums with so much care and thought into our track listing for no reason”.

The streaming service announced its acquiescence by tweeting: “Anything for you.”

Adele added: “Our art tells a story and our stories should be listened to as we intended. Thank you Spotify for listening.”