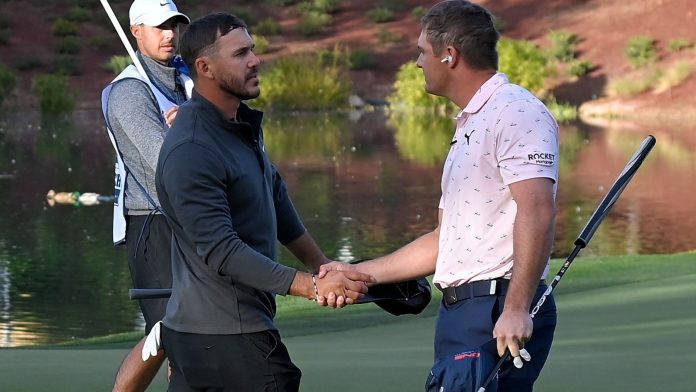 Bryson DeChambeau and Brooks Koepka have feuded for more than a year but bragging rights went to Koepka, who eased to victory in annual charity clash in Las Vegas and admitted “I just wanted to spank him.”

Two of the world’s leading golfers feuded for much of 2021, barring a brief break for the USA’s wide-margin Ryder Cup victory in September, but it is former World No 1 Koepka who ends the year with bragging rights.

The latest instalment of the charity event was much-hyped, mainly because of the trouble between the pair which escalated at the PGA Championship in May, but on the course it was one-way traffic with DeChambeau unable to get into much of a rhythm at the Wynn Golf Club.

Koepka holed from 15 feet to win the second hole, moved into a three-hole lead with further birdies at the fifth and sixth and then watched DeChambeau miss an easy birdie putt at the eighth to move to four up with four to play.

DeChambeau missed another putt at the ninth and conceded, although the official scorecard showed that hole to have been halved and a 4&3 margin for Koepka.

“It was fun to come out here and settle this,” Koepka said.

“It’s kind of like my major right now. I’m not going to lie. I just wanted to spank him.”

But there was a heavy hint that tensions remain between the pair, with Koepka saying simply “Nah, I’m good” when asked if he wanted to play more alongside DeChambeau.