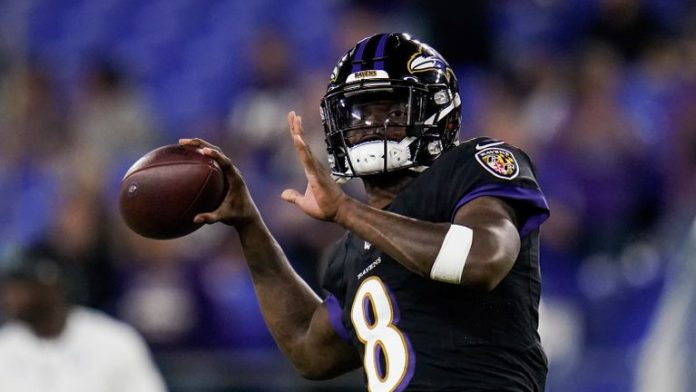 A bizarre, error-strewn second quarter saw Ravens quarterback Lamar Jackson picked off on three consecutive drives, as well as Jarvis Landry and Baker Mayfield cough up fumbles for the Browns – the five turnovers taking place within the space of just 17 plays and less than three minutes

In a bizarre, error-strewn second quarter, Jackson was picked off on three consecutive drives. But the Browns too had their own problems on offense, with Jarvis Landry and Baker Mayfield both coughing up fumbles in the same quarter – the five turnovers all taking place within the space of just 17 plays and less than three minutes of action.

Denzel Ward, Grant Delpit, Ronnie Harrison Jr., and John Johnson later in the fourth quarter, came down with the interceptions for the Browns, while rookie Odafe Oweh and Patrick Queen recovered the fumbles for the Ravens.

At the end of the sloppy first half, Baltimore held a slender 6-3 lead, though Jackson would come out a new man immediately after the break, leading his team on a 10-play, 75-yard scoring drive capped with a stunning scramble to avoid pressure and scoring strike from 35 yards out to Mark Andrews in the endzone.

The Browns answered back later in the third quarter as Mayfield found his tight end David Njoku with a 20-yard touchdown pass to again make it a three-point game.

Jackson was then intercepted for a career-high fourth time on Baltimore’s next possession, but Cleveland couldn’t capitalise as both offenses continued to struggle for the rest of the contest – the Ravens limiting the Browns’ second-ranked rushing unit in the league to just 40 total yards on 17 carries.

Justin Tucker’s third field goal of the game, a 49-yarder with one minute and 10 seconds remaining, gave the Ravens a six-point lead and the defense held out thereafter to secure the win.

The two teams meet again in a fortnight’s time, with the Browns (6-6) now heading into their bye week before hosting the Ravens (8-4) in Week 14.

In between, Baltimore have the small matter of another AFC North divisional matchup as they travel to Pittsburgh to take on the Steelers (5-5-1) next Sunday.