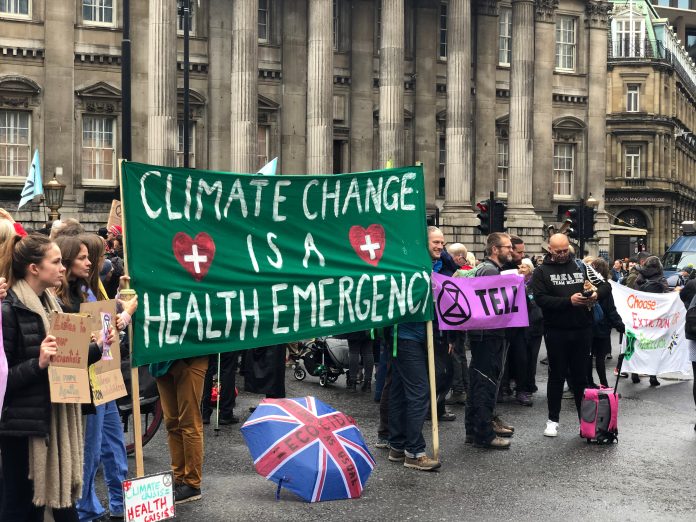 Over the past century, the Earth’s average temperature has risen by 1.5 degrees Fahrenheit. Although it seems like a negligible amount, this global warming is out of the ordinary in the planet’s recent history, causing dramatic shifts in climate patterns and weather. Beyond that, scientists predict it will get even worse in the years to come.

Every human being on the planet is — and will continue to be — affected by these massive changes to our collective living environment. And some experts consider climate change to be “the biggest health threat facing humanity.” According to a report from the World Health Organization, researchers have projected that it may cause as many as 250,000 additional health-related deaths each year between 2030 and 2050. Failing to mitigate climate change and implement long-term solutions puts everyone at risk for a number of climate-sensitive health impacts.

It’s hard to overstate the severity of these climate-driven health risks. And the adverse health consequences of climate change have a disproportionate impact on the globe’s poorest and most vulnerable populations, says Robert Dubrow, faculty director of the Yale Center on Climate Change and Health.

One of the effects of climate change is the increased frequency and severity of extreme weather events. Warmer global temperatures lead to more frequent and longer heat waves, which can cause heat stroke and dehydration. Floods also become more common and severe, spreading bacteria, viruses, and other microbial contaminants. These climate events, including hurricanes, droughts, and wildfires, increase the risk of respiratory, cardiovascular, and gastrointestinal diseases, along with other health threats.

“Wildfires have acute effects, such as people being burned to death or dying from asphyxiation due to acute smoke inhalation,” says Dubrow. “In addition, wildfires emit a tremendous amount of air pollution that spreads far and wide, beyond the immediate vicinity of the wildfire.” Exposure to wildfire smoke can cause both acute and chronic lung and heart diseases because it emits particulate matter, or fine air pollutants small enough to enter the lungs and get into the bloodstream.

The transmission and spread of infectious diseases are affected by global warming, too. Sea surface temperatures are rising due to climate change, and the disease-causing Vibrio bacteria thrive in warmer coastal ocean waters, says Dubrow. Vectors like mosquitos and ticks also do better in hotter temperatures, potentially increasing the incidence of vector-borne diseases such as Lyme disease or malaria. According to a 2014 Science study, malaria had spread to highland areas in Colombia and Ethiopia — which were previously protected from the disease by cool mountain temperatures — because higher altitudes are becoming warmer.

Shorter and milder winters as a result of the warming climate are also a pressing health threat. “When winters are shorter and milder, more ticks and mosquitos that carry diseases survive the winter, leading to larger tick and mosquito populations in the spring, summer, and fall,” says Dubrow. Although extreme heat can inhibit vector survival and reduce the incidence of vector-borne diseases. In some areas, it still poses a health risk for individuals who might suffer from heat-related illnesses and food insecurity.

Changes in the climate won’t only affect an individual’s physical health; extreme weather events have mental health consequences, too. Additionally, it will become increasingly common for people to be forced to leave their homes permanently due to sea level rise, says Dubrow, which may exacerbate mental distress.

For example, about 1 in 3 people who were affected by Hurricane Katrina in 2005 exhibited symptoms of post-traumatic stress disorder (PTSD), not only in the immediate aftermath of the disaster, but even four and twelve years after it. More recently, the severe bushfires in Australia were associated with increased symptoms of anxiety and depression as well. The impacts of climate change are expected to be more severe in developing countries, and for marginalized communities who suffer greater harm from climate hazards, it’s even more challenging to recover from disasters.

However, “you don’t have to be a survivor of a full-blown climate disaster to suffer from anxiety or grief over the climate crisis,” says Atkinson. People can feel anxious about the impact of climate change or feel a sense of powerlessness arising from an immense, existential threat. For Indigenous peoples who have a close relationship with the environment, climate change is not only a huge threat to their livelihoods, but also their cultures, identities, and ways of life. “Different people have different levels of vulnerability or security,” says Atkinson. “There are vast differences in the way our climate crisis impacts mental health when we compare the global north to more vulnerable communities across the global south, or look at differences across racial, socio-economic, ethnic, and age groups.”

A 2021 study released in a preprint found that the climate crisis is causing widespread psychological distress among individuals aged 16 to 25. About 59% of their 10,000 respondents reported that they felt very or extremely worried about climate change, while 45% said climate anxiety affects their daily function. The researchers stated that inadequate government response to the climate crisis contributes to the distress experienced by the youth.

“Distress is actually a normal and healthy response to unprecedented violence and loss,” says Atkinson. “It’s a healthy sign of attachment to a livable future and other forms of life with which we share this planet.”

Changes in climate, and the risks that come with it, may feel overwhelming, but there are some strategies you can do on an individual level to prevent or minimize health impacts — at least, to an extent. “People who live in areas prone to extreme events such as wildfires, hurricanes, or floods should be prepared with items such as back-up generators, flashlights, enough food and water, and a list of items they should take with them if they need to quickly evacuate,” says Dubrow. Those with respiratory health conditions, meanwhile, should remain indoors during wildfire smoke episodes.

Individuals who are distressed by the effects of climate change may benefit from seeking community and being surrounded by people who feel the same way about the environment, says Atkinson, which can help with processing feelings of isolation and grief. “It’s important to give ourselves permission to feel sadness and fear and outrage – that’s the only way to fully process it and then move forward to action,” she says. “Any loss not fully confronted and grieved can lead to numbness, repression, cynicism, or apathy.”

Some individuals find that living sustainably, like reducing waste and making lifestyle changes to be more environmentally friendly, helps them deal with the feelings of helplessness catalyzed by the climate crisis. (Although certain seemingly eco-friendly efforts, however, may not be as sustainable as you might think.) Experts agree that it’s also important to build collective action and work together when it comes to environmental issues, like participating in climate protests, getting involved with community projects, or joining climate change awareness campaigns on social media.

“The important thing about making that first step toward concrete action is that it exercises our civic muscles and builds hope through solidarity,” says Atkinson. “Personal actions are important, but they pale in comparison to what we can achieve through coordinated political action. We don’t have fifty years to solve this by gradual personal change.”