Home World North Korean defector recaptured in China after more than 40 days on... 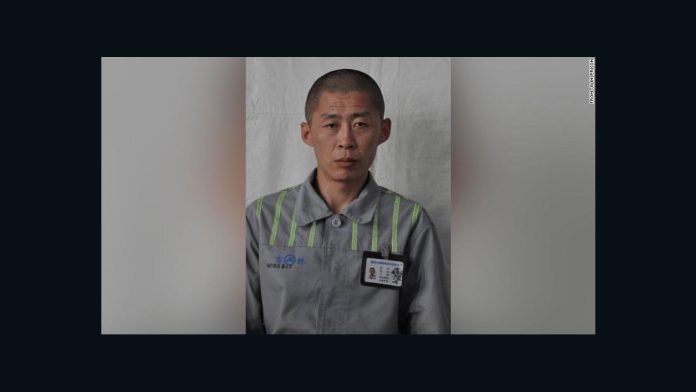 The 39-year-old, identified by Chinese authorities as Zhu Xianjian, was just two years short of completing his sentence, when he staged an escape that went viral, state media reported.
Court documents detail that Zhu was a North Korean coal miner who swam across a river to a Chinese village in Tumen city, Jilin province in 2013. He was arrested later that year, and in 2014 was sentenced to 11 years in prison for illegal border crossing, larceny and robbery, to be followed by his deportation, according to a court judgment.
Zhu, whose sentence was twice reduced owing to good behavior, broke free from prison in the city of Jilin on October 18. His dramatic escape, which was caught on video and included using a rope to damage an electric fence and jumping off a high prison wall, has led to speculation online that Zhu was a former member of the North Korean military.
A related hashtag on Weibo, China’s version of Twitter, has since attracted more than 800 million views.
Authorities offered a reward of more than $23,000 for his capture, and later raised it to over $100,000 — more than 350 times the average monthly income of local residents.
On Sunday, Jilin police said in a statement that Zhu had been apprehended at about 10 a.m local time, without offering further details.
In a video of his arrest posted by the state-run Global Times, an emaciated Zhu is seen being carried limply by his arms and legs by police officers on a dock. In related footage, he could be heard wailing as he was being manhandled into a car. Zhu is believed to have been shot in one leg and sent to the hospital for treatment.
On Weibo, some users have expressed surprise that Zhu was able to survive for so long out in the cold, with temperatures dropping below freezing in the past 10 days.
North Korean defectors who are sent back to their home country can face severe consequences including torture and sexual abuse, according to Human Rights Watch.
In their manhunt for Zhu, the police erroneously arrested another man, who bore an unfortunate resemblance to Zhu, five times over the course of three days, according to state media.
“My first reaction is that the guy who looks just like him can finally be free,” one user commented under the Global Times post about Zhu’s arrest.