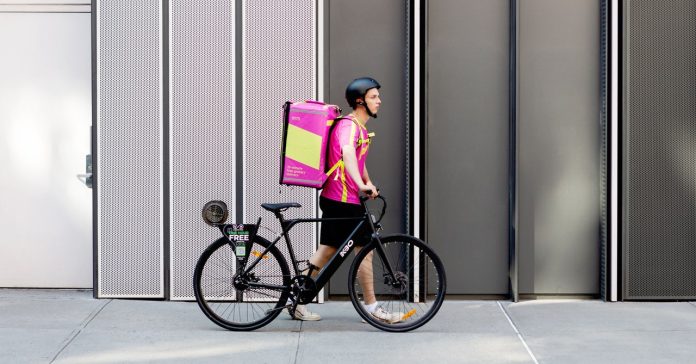 The gig economy is one of Silicon Valley’s greatest tricks of the last decade. Armed with a smartphone, a car, a bag, a bike, workers can sign up and sign on—to ferry passengers, to perform household chores, to pet sit, to deliver groceries. Companies, including Uber, Lyft, and DoorDash, praise the model’s flexibility for workers sick of shifts. It also allows the companies to neatly sidestep paying for the benefits that traditionally come with employment in the US: health care, paid time off, and workers’ compensation. Last year, the companies funded a successful California ballot initiative that enshrined the gig economy principles into law. Similar efforts are underway in Massachusetts, Illinois, and New York.

But a new kind of business, which has alighted with a capitalist fury on US cities including New York and Chicago this fall, has scrapped this playbook. A host of “instant delivery” startups—Jokr, Buyk, 1520, Fridge No More, Gorillas, Getir—promise extra-fast, convenience-store-style products direct to city dwellers’ doors. The companies say orders will arrive 30, 20, 15, or even 10 minutes after customers hit the Buy button on their apps. And the couriers making the deliveries, mostly on electric bicycles, aren’t gig workers or contractors—they’re employees.

“It’d be very difficult for us to guarantee 10-minute grocery delivery if we didn’t have people on staff,” says Adam Wacenske, the head of US operations at Gorillas. At 18 months old, and armed with more than $1 billion in funding, the German startup is a formidable veteran in the instant delivery space. Gorillas employees receive health care benefits and paid time off, and most are full-time, he says. The company says couriers get the equipment they need — including ebikes, reflective vests, and rain gear — for free.

These startups generally rent small storefronts in dense, urban areas and stock each mini-warehouse with between 1,000 and 2,500 products—another departure from companies such as DoorDash, UberEats, Instacart, and Shipt, which tend to operate virtually. Inside the storefronts, workers, also employees, stock, pick, and bag items to fulfill orders, which tend to be smaller than a typical weekly or biweekly grocery haul. Couriers stand by to ferry them to their destination. Both DoorDash and GoPuff, another delivery company, run similar warehouses for convenience items, but they only employ warehouse workers, with delivery people still working as independent contractors.

The companies have benefited from a surge in funding for food and beverage delivery businesses, which have pulled in $16 billion in 2021 so far, according to CB Insights. The cash allows some companies to subsidize delivered groceries, so that they’re cheaper than what a customer might pay at a store, says Jackie Tubbs, an analyst with CB Insights who studies the industry.

Jordan Berke, the founder of Tomorrow Retail Consulting who previously ran ecommerce operations in China for Walmart, says the companies are displacing trips to convenience stores, gas stations, and small supermarkets. They’re built on the theory that, when it comes to delivery, there is no such thing as too fast. They’ve grown quickly during the pandemic, when some people tried to avoid leaving their homes. Berke expects many of those customers to stick. “What we’re seeing is that instant access to things we need is a never-go-back experience,” he says.

“It’d be very difficult for us to guarantee 10-minute grocery delivery if we didn’t have people on staff.”

Not all the employees are happy. In Berlin, Gorillas workers have complained about missing pay and alleged that the company’s jackets and rain gear don’t sufficiently protect them against the weather. Some German Gorillas workers who participated in “wildcat” strikes—unsanctioned by trade unions and not protected by law—were reportedly fired after bringing several warehouses to a standstill. The standoff has led workers and labor experts to question whether the new model is simply gig work dressed in new clothing. “We take a lot of pride in making sure our employees’ experiences in the warehouse, in our corporate headquarters, and for our riders is top notch,” says Wacenske.

In the US, workers for New York-based Buyk have complained in online forums about late paychecks, with some saying they quit as a result. “The vast majority of issues around payroll have been resolved,” says CEO James Walker. “I can’t say as a startup company, and one that’s growing really quickly, that we don’t have those growing pains.”