Home Sport Alonso: Podium can be springboard to success in 2022 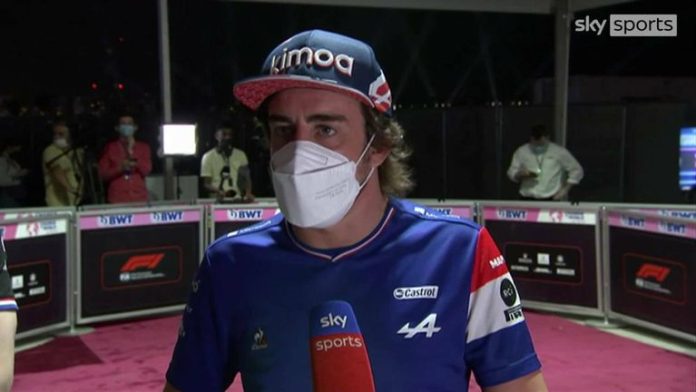 “I think we’ll be more ready in 2022. The podium brings an extra boost”; Fernando Alonso is optimistic that Alpine will have further success when the regulations change next season

Fernando Alonso is confident that Alpine can compete towards the front of the grid when Formula 1 introduces new regulations next year.

After initially taking time to rediscover his top form on his return to F1 this year, Alonso’s season has picked up in the second half of the campaign, culminating in his first podium finish since 2014 at last month’s Qatar Grand Prix.

Mercedes have dominated in the hybrid era, winning the last seven constructor titles.

However, the biggest set of rule changes since 2014 will come into effect next season, and that has given the Spaniard renewed hope that he can fight for further podiums.

“I felt that we were building something even before the podium because the team had some weaknesses that we saw very early in the year,” he told Sky Sports F1 ahead of this weekend’s Saudi Arabian Grand Prix.

“We worked on those throughout 2021 and I think we’ll be more ready in 2022. The podium for sure brings an extra boost for everyone. They were truly happy for the podium which felt very nice to me.

“Even some of my rivals, I felt they were very happy for me to experience again the podium. That was nice to see and hopefully we can see more next year.

“I take this one as a gift for this year and for next year we need to work from zero.”

🚨 When to watch live this week 🚨

Our full weekend schedule including the return of F2: https://t.co/SevnqxUfVx#SkyF1 | #F1 | #SaudiArabianGP 🇸🇦

Alonso had his greatest success with Alpine, previously known as Renault, winning successive world titles in 2005 and 2006 with the team.

Despite coming close on several occasions with both McLaren (2007) and Ferrari (2010 and 2012), an elusive third world title and the chance to match his hero Ayrton Senna has continued to elude him thus far.

After leaving the sport for two years, the two-time world champion returned to his former team this season.

At 40, his desire to succeed still burns as bright as ever and when asked whether Alpine can compete with the frontrunners next year, he stated: “Anything is possible.

“I think the new regulations will bring a lot of surprises and hopefully we are one of those good surprises.

“We will find out in February when we put the car out on track. At the moment I think it’s difficult to estimate which team is going to do a better job.”

Alpine are now a more comfortable fifth in the constructor standings ahead of AlphaTauri but are well behind the leading four teams in Mercedes, Red Bull, Ferrari and McLaren.