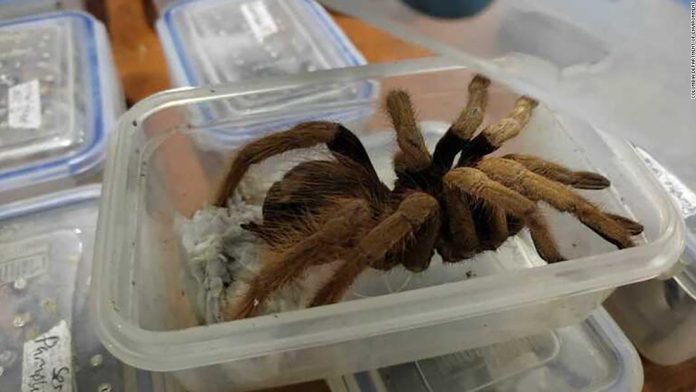 A statement from Bogota’s environmental authority said at least 232 tarantulas, 67 cockroaches, nine spider eggs, and a scorpion with seven of its young were confiscated at the capital’s El Dorado airport.
The bugs were kept in more than 200 plastic containers hidden in a suitcase, the statement said.
Two German citizens were detained and will be prosecuted, officials said. They said they were taking the animals to Germany for academic purposes, but lacked the permits to collect and transport them.
Video shows some of the insects crawling around a box as authorities examine them. A tarantula can be seen climbing on a wooden branch, while another bug crawls across an official’s arm while they inspect it.
Bogota’s environment secretary, Carolina Urrutia, said even if people intended to use wild animals for scientific research, they still need permission from the relevant authorities to remove them from the country.
This is the second incident in less than three months in which authorities have seized wild specimens intended to be illegally exported from Colombia.
In September, officials confiscated a shipment of almost 3,500 shark fins bound for Hong Kong.