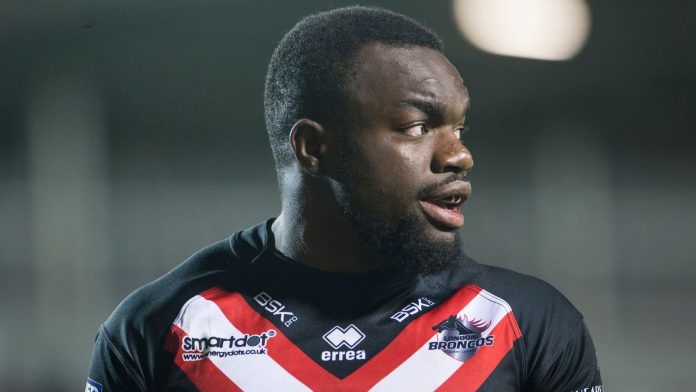 Born in Lagos, raised in London and now playing for Wakefield, prop Adebiyi has high hopes for growing rugby league; “I seriously think rugby league could be big in Nigeria and could see Nigeria competing with some of the big nations in the future,” he said

Among the diverse array of nationalities which will be represented in Super League in 2022, there will be at least one player flying the flag for Nigeria.

Although raised mostly in London after moving to these shores with his family at the age of six, Sadiq Adebiyi proudly seized the opportunity to represent the country of his birth two years ago when it hosted – and won – the revived Middle East-Africa Championship.

Like so much else, the Covid-19 pandemic has led to the African nation’s nascent rugby league development being put on hold. Yet prop Adebiyi, who has joined Wakefield Trinity for next year, still has ambitions to help build on that MEA Championship success.

“Having experienced it two years ago, it was something I was keen to do and get a lot of players from Nigeria playing rugby league,” Adebiyi, who scored two tries in Nigeria’s 38-10 win over Morocco in the final, told Sky Sports.

“It’s a heritage I’m super-proud of and unfortunately it’s taken a bit of a backwards step, but when it comes down to it, I’d love to be involved getting the country of Nigeria playing rugby league and doing my bit to get everyone in Nigeria to know what rugby league is.

“The support they were getting was outstanding, so if we can use some of that and kick on from now, I seriously think rugby league could be big in Nigeria and could see Nigeria competing with some of the big nations in the future.”

Born in Lagos and growing up a football fan, Adebiyi got his first taste of rugby league in London with junior club Richmond Warriors and showed such an aptitude for the 13-man code that he earned a place on London Broncos’ scholarship scheme.

Progressing through the ranks after starting out in the U15s, he made his debut in the Championship in 2015 and was part of the Broncos team which earned promotion to Super League three years later with victory over Toronto Wolfpack in the 2018 Million Pound Game.

Having given a few teams a bloody nose, including eventual champions St Helens, the Broncos were relegated back to the second tier on points difference on the final day of the 2019 regular season, but a sign of the ability in that team is the number of players from it which moved to other Super League clubs and continue to excel at that level.

Recent England call-up Jordan Abdull – a Man of Steel nominee in 2021 – is with Hull Kingston Rovers, Rhys Williams is at Salford Red Devils, while Adebiyi now links up with Eddie Battye and Jay Pitts at Trinity, and the 24-year-old is taking plenty from that season into his latest opportunity to play in the top flight.

“When we came up, pretty much everyone wrote us off and we used that as fuel going into games and the season,” Adebiyi said.

“We prided ourselves on working hard and sticking in there, and after the first game where we played Wakefield and won, we knew where we stood and what we needed to do to be successful.

“It wasn’t meant to be, unfortunately, coming down to the last game of the season and getting relegated, but it was a great experience and the likes of Pittsy and Battye will say the same things.

“It’s not that we shouldn’t have got relegated, it was just one of those where we were very good players and any other year, we’d have been comfortable in that league.”

Thank you to @LondonBroncosRL it’s been an awesome journey representing the club since u15, thank you to all the coaches,staff and players that have helped in developing me as a player and a person. Also thanks to the fans for making it special. @BroncosOSG 🐴 https://t.co/mPf09BOn7U

As well as wanting to show he can establish himself as a Super League player, Adebiyi is eager to prove to Wakefield he deserves having the second-year option on his initial one-year contract taken up, coming into the new campaign on the back of a 2021 season which saw him miss a large part of it due to an Achilles injury.

It has been a positive opening to pre-season training for him, though, including picking up a few useful pointers from fellow front row and Wakefield cult hero David Fifita, and Adebiyi is sensing a good feeling around the Be Well Support Stadium as the Willie Poching era gets under way.

“Having been here a couple of weeks, there is something special about this club,” Adebiyi said. “The players within pride themselves on working hard and having Willie as head coach, he’s just a positive character to have.

“It will be a great opportunity to get some game-time in Super League and with the injury I had, missing the majority of the year, I’ve got something to prove.

“The trust Wakefield have given to me, bringing me up this year, I’ve got to prove to them I’m worthy of playing for that club and representing the shirt week in, week out.”