Home Sport Cowboys back to winning ways in New Orleans 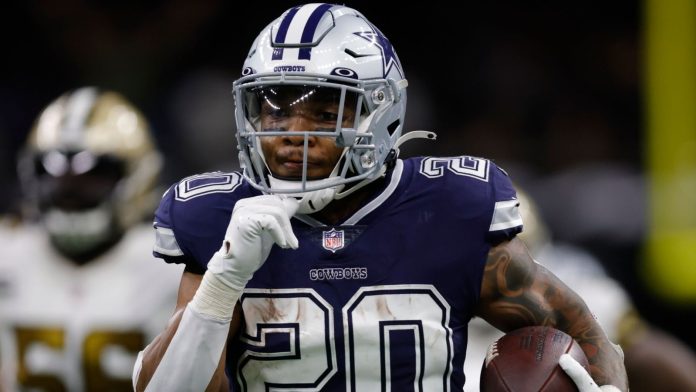 Taysom Hill, in his first start of the season at quarterback for the New Orleans Saints, rushed for a career-high 101 yards but he completed less than 50 per cent of his passes (19 of 41) and tossed four interceptions to go with his 264 yards and two TDs

The Dallas Cowboys got back to winning ways, while the New Orleans Saints lost a fifth straight as the visitors came away from the Superdome 27-17 winners on Thursday Night Football.

Dak Prescott completed 26 of 40 passes for 238 yards and a touchdown, while Tony Pollard had a long scoring run and Carlos Watkins returned an interception for a touchdown as the Cowboys overcame the absence of head coach Mike McCarthy and four assistant coaches due to Covid-19.

Making his first start at quarterback for the Saints this season, Taysom Hill showed flashes, particularly on the ground as he rushed for a career-high 101 yards, but he completed less than 50 per cent of his pass attempts (19 of 41) and tossed four interceptions to go with his 264 yards and two TDs.

The victory ensures the Cowboys (8-4) are back to winning ways after having lost their last two, including a 36-33 defeat at home to the Las Vegas Raiders on Thanksgiving Day last Thursday. The Saints (5-7), meanwhile, slip further out of playoff contention in the NFC.

New Orleans missed the chance to eke out an early lead as Brett Maher missed a 56-yard field goal try to cap their second offensive series of the game – the Saints would fail to put up first-quarter points for the fifth consecutive game.

Dallas, who turned the ball over on downs on their second possession when going for it on 4th-and-2 from the New Orleans 34-yard-line, went up 7-0 late in the first quarter as Prescott found Michael Gallup in the back of the endzone – a great toe-tap catch.

MICHAEL GALLUP. WHAT A GRAB!

Hill answered back, leading the Saints down the field on their next drive, throwing a 24-yard touchdown pass to Lil’Jordan Humphrey to tie things up. But Greg Zuerlein kicked two field goals for the Cowboys – the first a 55-yarder and the second coming off the back of Hill’s first interception – to earn the visitors a six-point lead.

The Saints would cut that in half soon after the restart courtesy of Maher’s right boot, but a 58-yard touchdown run from Pollard late in the third quarter proved to be a bit of a killer blow.

Lattimore said GIMME THAT! @Saints have the ball in Cowboys territory.

Prescott tossed up an interception to Marshon Lattimore midway through the fourth, on a pass intended for CeeDee Lamb, to gift the Saints an extra possession to try to get back into the game, but five plays later Hill gave it right back when throwing his second INT.

The next two New Orleans drives would end the same way, with Stefon Diggs claiming a ninth interception on the season and Hill’s fourth a pick-six returned 29 yards to the house by Watkins. Two plays later, Hill did end his evening on a more positive note, with Deonte Harris racing away for a 70-yard catch and run TD, but the damage was already done.

Deonte Harris turns on the jets for a 70-yard touchdown! @tayynation1 #Saints

The Cowboys (8-4) travel to Washington (5-6) in Week 14 for the first of what could prove to be two crucial divisional matchups against the Football Team in the month of December, while the Saints (5-7) get the chance to end their losing streak on the road in New York as they face the Jets (3-8).