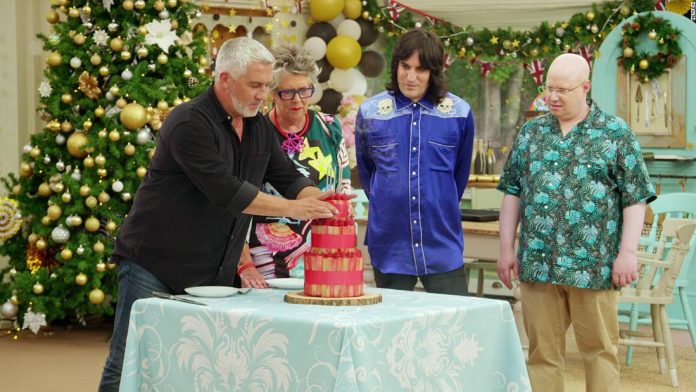 Every year, there’s always at least one day where I find myself searching for the holiday joy those jewelry commercials tell me I should be feeling. My antidote besides going to Jared? Some happy holiday viewing. Here’s a mix of old and new viewing options to keep you in the spirit.
“The Great British Bake-Off: Holidays” (Dec. 3, Netflix) – Season 4 of this holiday special is just what you knead if you’re feeling like a soggy bottom. This year, judges Paul Hollywood and Prue Leith are joined by regular host Matt Lucas and fill-in Tom Allen as they welcome back to the tent alums Jamie and Rosie (from the 2019 edition), Ruby from 2018 and James from 2017.
“Young Rock” Christmas special (Dec. 15, NBC) – The Freshman season of “Young Rock” was one of the most joy-filled parts of the regular year, so this Christmas special is sure to provide the same amount of good vibes. The special takes place in three time periods. In 1982, “an unexpected guest” puts a damper on little Dwayne’s holiday. In 1987, Rocky and his son take some mall jobs, and in 1993, Dwayne must spend Christmas with Coach O.
“Puppies Crash Christmas” (streaming now, Hulu) – This special, which premiered in 2017, is an old viewing recommendation. But you know what? It’s new to someone and that someone will probably get a lot of joy from watching puppies frolic among presents.
“Live in Front of a Studio Audience: The Facts of Life and Diff’rent Strokes” (Dec. 7, ABC) – Not lal joy has to come exclusively from holiday-themed content. Enter this special. The last time Jimmy Kimmel produced one, it was a hoot. This time, with Jennifer Aniston in the role of Blair and Gabrielle Union as Tootie, another great time is surely in store.
“The Rescue” (Dec. 3, Disney+) – To my above point, this harrowing documentary, about the 2018 rescue of a Thai soccer team and their coach from a flooded cave, has its share of tragedy and drama. But what moved me most while previewing it (a screener was provided to press) was how inspiring it was to watch the resilience of the human spirit — from the divers who risked it all, to the community who came together to save this group of children. This documentary is all about the type of courage only the best among us are capable of and what the rest of us should be striving to be when called to.
“Dragons: The Nine Realms” (Dec. 23, Hulu) – Here’s one for the kids from the “How To Train Your Dragon” franchise. The series is set 1,300 years after the events of the film and is about a group of “misfit kids,” who “uncover the truth about dragons and where they’ve been hiding,” according to a logline. All six episodes will be available to binge.
“20 Years of Christmas with the Tabernacle Choir” (Dec. 13, PBS – check local listings) – Last year was a somber holiday, but I remember one bright spot being virtually viewing the gorgeous Cathedral Choral Society’s Joy of Christmas concert with family members across the country. This year, it’s a little easier for us all to get together, but don’t sleep on the joy-inducing powers of a pre-recorded Christmas concert. In this special, PBS and family entertainment network BYUtv team up to honor two decades of tradition with a two-hour special hosted by Tony Award-winner Brian Stokes Mitchell. This choir nerd is excited. (Other choir nerds, I also recommend revisiting the CCS special if you haven’t already seen it. “In the Bleak Midwinter” had me sobbing on my couch.)

We don’t have many episodes left in this season of “Succession,” and I’m more and more stressed out with each passing week. I told my husband a few weeks ago that I was increasingly getting the feeling like I was watching “The Walking Dead,” but here, Logan is the zombie and Kendall is the only one brave enough to pick up an ax. Except Kendall just realized it’s a toy. Now, I’m waiting for Logan to eat Kendall’s brains.
I don’t think that’s actually going to happen, obviously. (But what a finale that would be!) I do have a lot of burning questions, though. Among them:

CNN’s Brian Lowry previewed “Voir,” the series about movies that Netflix wants you to watch at home on TV.
“Give Netflix points for chutzpah: Having contributed mightily to the woes of the theatrical movie business, the service’s new series, “Voir,” looks back fondly on going to the movies.
Produced by director David Fincher and David Prior, the series is described as “a collection of visual essays for the love of cinema,” devoted to seminal films of the past.
“I can remember the exact moment I fell in love with movies,” Sasha Stone explains in her short film about “Jaws.” “I came of age in a dark theater, staring up at that big screen.”
The five other shorts (most run about 20 minutes) cover a variety of movies and topics — including “Lawrence of Arabia” and “48 HRs.” — each through a different voice and lens. But the overarching theme is the formative nature of experiencing these movies in a theater, presented on a service devoted to making content available at home. One essay, from Taylor Ramos, looks at the blurring of lines between movies and television, citing “The Sopranos” as the key bridge in raising TV’s game by serving an audience “hungry for ambitious television.”
In its totality, “Voir” is pretty interesting. And hey, if you get bored with any one essay (a distinct possibility), you don’t even need to sneak into another theater to go watch something else.”

‘Diary’ of a Disney+ special

One more from Lowry, who still remembers middle school (barely) and the Charlie Brown specials.
“After a quartet of “Diary of a Wimpy Kid” live-action movies, book creator Jeff Kinney puts his stamp on the small screen with an animated special for Disney+, which he wrote and produced. The animation feels more directly connected to the source, in much the way cartoonist Charles Schultz helped define the Charlie Brown specials of the 1960s. Here, the story as usual hinges on Greg Heffley and his horrible transition to middle school, straining his friendship with the goofy Rowley, who takes one look at the conditions and says, “Maybe my mom can home school me.”
Running a little less than an hour, it’s a nifty introduction to the books, with the minimalist animation (directed by “Futurama’s” Swinton Scott) nicely mirroring the rudimentary drawings. Brady Noon of “The Mighty Ducks: Game Changers” voices Greg.”