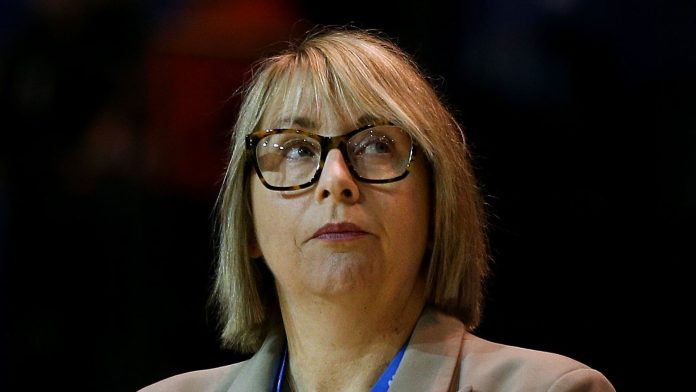 The Scottish Thistles dispatched Barbados 74-32 at Glasgow’s Emirates Arena on Thursday; the two outfits will meet again on Friday evening for a second contest

Lisa Alexander believes the Scottish Thistles’ performance against Barbados, which delivered a 74-32 victory, was at the level of a team ranked within the world’s top five.

The Thistles’ current world ranking is eighth and their sights are firmly fixed on qualifying for the 2022 Commonwealth Games.

In order to do that, they must ensure they are ranked between seven and 12th in the world when the qualifying period ends on January 21, 2022.

The national side’s encounter with Barbados on Thursday evening at Glasgow’s Emirates Arena set their stall out well. It was their first official World Netball ranking contest under head coach Tamsin Greenway.

Thanks for all the messages and support. Loved my first test as an International Coach, it was great to see the team perform, a packed house & to share our Thistles journey so far. The challenge now – to back up our performance tomorrow. We go again…👊🏼🏴󠁧󠁢󠁳󠁣󠁴󠁿 https://t.co/G5ewkR39G8

Greenway took the reins in early 2020 and the global pandemic meant that the start of her first international coaching role was extremely challenging. She spent a great deal of time only being able to speak to her players on video calls.

Ahead of this two-match series against Barbados, she was able to enjoy face-to-face coaching time with her players and she’s recruited in Sara Francis-Bayman as her assistant coach.

Elsewhere within Netball Scotland’s structure, Karen Atkinson has also been promoted into the role of performance director having previously been Strathclyde Sirens’ technical director.

The trio bring together years of international experience as players and all are now established coaches in their own rights. As a unit, it’s a powerful one to lead the Thistles and on a home court, Scotland delivered.

“There are a lot of positives to take,” Greenway said to BBC Scotland Sport after their 74-32 victory. “I’m under no illusion that Barbados will come back stronger though.

Loved supporting Scotland Thistles v Barbados in the international netball series at the Emirates tonight. A big, fast-paced win for 🏴󠁧󠁢󠁳󠁣󠁴󠁿 + valuable match practice for next years Commonwealth Games. 👏👏👏@NetballScotland
And there was half time pies. 👌 https://t.co/zrMNulxOpK

During the first 30 minutes, Scotland created a 27-goal led and went into the interval 41-14 up.

“For my first job as an international head coach, it was quite nice to be there at half-time [knowing that we had the win]. To get four new caps on court and put into practice what we have been doing, was great.

“I learnt a lot. You have to remember that we went into this competition blind; the last time that we saw Barbados was during the 2019 Netball World Cup,” Greenway continued.

“There were a lot of their players I hadn’t seen play and I hadn’t seen my own players take to that stage with the nerves and excitement that come from a home game.

“I learnt a lot about how they [Scotland] built into the game. It was nice to know that some of our tactical elements and structures work, also seeing our players step up when Barbados came into the game in the second half [was great].”

I’m so proud of how they stepped out, represented the Thistles and put on a Scotland dress. Some of the girls earned first caps and all put in a proud performance.

Alexander isn’t someone who hands out praise left, right and centre, however she was extremely impressed by the Thistles’ work.

“For me, that was a top-five world ranking performance from Scotland,” Alexander noted on BBC Sport Scotland.

“I know that I’m giving them a big wrap but that is the sort of scoreline you would see from a top five team.

“Full credit to Scotland. I think that Barbados will be much better in the second outing because they didn’t get the connections [going] that they needed to.

“I think we’ll see greater connection on Friday evening but Scotland, to their credit, really made it difficult for Barbados to even get into the game.”