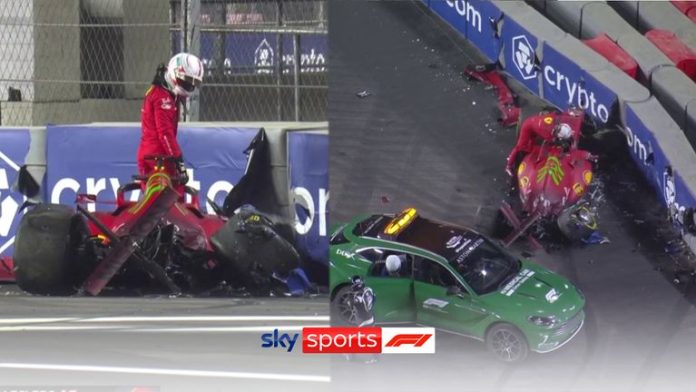 Lewis Hamilton continued his strong early pace at the Saudi Arabian GP with another fastest time in Practice Two, as his championship rival Max Verstappen finished only fourth in a hectic session around Jeddah’s new street circuit that was ended with a heavy crash for Charles Leclerc.

Leclerc lost control of his Ferrari through the high-speed Turns 21 and 22 and slammed into the barriers at around 150mph to bring out red flags in the closing stages. His Ferrari suffered big damage, though thankfully Leclerc was unhurt.

That was the most dramatic moment of a session Hamilton topped, securing a Friday practice double on the crucial penultimate weekend of his title battle against Verstappen despite a disrupted P2.

Hamilton, nor Valtteri Bottas, who was just 0.061s slower, managed to post a time on the soft tyre during the qualifying simulations, amid plenty of traffic on the narrow yet ferociously fast Corniche circuit. But the Mercedes drivers still outpaced the chasing pack, which was surprisingly not led by Verstappen.

Pierre Gasly was the fastest of the soft-tyre runners in third for AlphaTauri, within a tenth of Hamilton.

Verstappen finished fourth and 0.195s off Hamilton, the man he leads by eight points in the title race. Verstappen set his fastest lap on the quickest tyre, although by the time he had done so – with traffic also affecting him – his tyres were six laps old.

Sergio Perez was only ninth in the other Red Bull.

Fernando Alonso and Esteban Ocon, who shone in Qatar, once again found themselves in the top-10, ahead of Carlos Sainz in the Ferrari. AlphaTauri’s Yuki Tsunoda also shone in seventh, despite posting his best time on the hard tyre.

Leclerc, whose car Ferrari will likely be attempting to repair long into Friday night, was 10th, just ahead of the McLarens of Daniel Ricciardo and Lando Norris.

The maiden qualifying session at F1’s second-longest, and second-fastest, track is live on Sky Sports F1 at 5pm on Saturday.

Verstappen vs Hamilton: How title could be settled this weekend