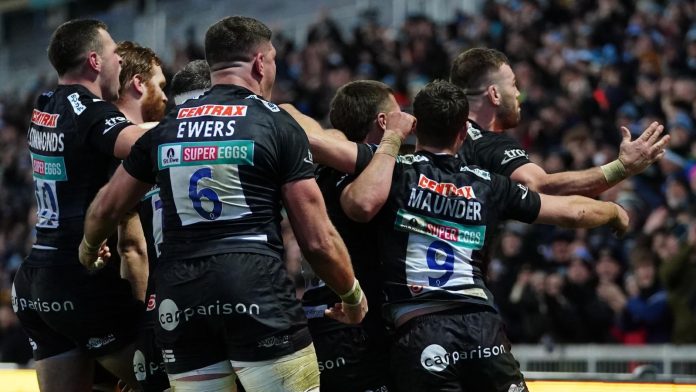 Catch-up on all of Saturday’s Gallagher Premiership action as Exeter beat Saracens, while London Irish, Northampton and Worcester won too…

While the eagerly-awaited contest fell below expectations in terms of its overall quality, Exeter took charge at key moments to inflict only a second Premiership defeat this season on Saracens.

Centre Alex Lozowski supplied all of Saracens’ points through five penalties, but a losing bonus point was all his team collected.

Winger Ollie Hassell-Collins scored a hat-trick as London Irish continued their good run of results with a comfortable 43-21 victory against Newcastle Falcons.

The Exiles have now lost just one of their last eight games in all competitions and they were clinical in running in six tries at a chilly Brentford Community Stadium.

They certainly gave signs of their growing maturity as they saw out their third win of the Gallagher Premiership this season without fuss and backed up last week’s victory at champions Harlequins.

It was a tough day from start to finish for the visitors, who lost lock Josh McNally in the warm-up and then saw both half-backs, Ben Spencer and Danny Cipriani, forced off injured during the first half.

Mike Williams, McNally’s replacement, was sin-binned for a high tackle during the first period as the Saints marched to four tries, two of which came from Juarno Augustus.

Rory Hutchinson and Tommy Freeman also scored before the break, while Bath responded through Sam Underhill and Lewis Boyce efforts.

The away side threatened early in the second half, forcing Sam Matavesi into the sin bin and scoring through Will Stuart.

But Saints came to life once again, and Courtnall Skosan’s double made the game safe for the Saints, consigning Bath to their ninth defeat in as many league matches this season.

Worcester held on to record a rare Gallagher Premiership victory at home to Wasps after Jimmy Gopperth missed a late touchline conversion for the visitors in a narrow 32-31 defeat.

Wasps – who were 18 points behind with 30 minutes to go – were without 18 injured players and some basic errors handed Worcester two tries in the opening 22 minutes.

The first after the away side were enjoying a man advantage with Melani Nanai in the sin bin for a rash challenge on Josh Bassett.

Both tries came from Wasps attacks just outside the home 22. The first was scored by scrum-half Gareth Simpson, who was in support when Duhan Van Der Merwe took possession after Marcus Watson’s forward pass to Brad Shields went to ground.

The away side had won the previous 14 Premiership matches between the sides in a run stretching back to 2013, but Fin Smith’s second penalty and a Ted Hill try from Graham Kitchener’s pass left them too much to do.