Home Sport Surging Chiefs back on the NFL’s championship radar 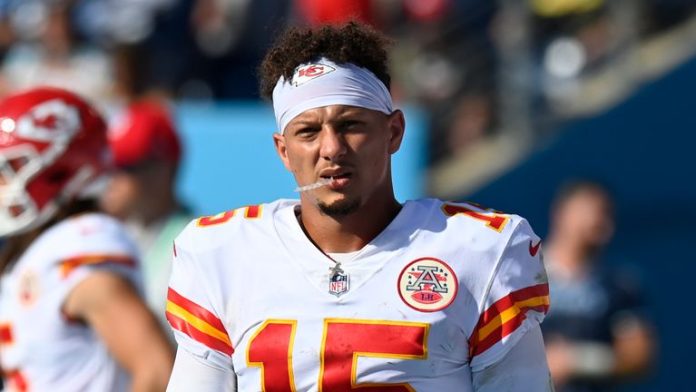 Watch the AFC West divisional matchup between the Denver Broncos and Kansas City Chiefs at Arrowhead Stadium (Kick-Off 1.20am, Monday morning) as part of a triple-header of NFL action on Sunday night, live on Sky Sports NFL from 5pm

So, what was everyone worrying about?

After their early-season turmoil, Andy Reid, Patrick Mahomes and company seem to be back in business, and the 7-4 Kansas City Chiefs get the chance to to pull clear of a packed AFC West with the visit of divisional rivals, the 6-5 Denver Broncos, to Arrowhead Stadium on Sunday – live on Sky Sports NFL from 1.20am in the early hours of Monday morning.

With so many shocking upsets across the league over the last few weeks, the Chiefs’ four-game winning streak has almost slipped under the radar. But in this most wide-open on NFL seasons, their improved form couldn’t have come at a better time.

It was just five weeks ago that the Chiefs capped off a miserable start with a 27-3 blowout loss to the Tennessee Titans, falling to a 3-4 record in the process.

That game was a snapshot of the Kansas City’s early season struggles – a leaky defense, constant turnovers and an offense reliant on Mahomes to make miracle plays to keep them in the game. Some of these issues – the defense, in particular – were not new, but while the Chiefs had previously found a way to overcome them, it now seemed they had run out of luck.

The Chiefs were preseason favourites and their offense considered to be the NFL’s new gold standard. Some commentators had even predicted they would go the whole campaign unbeaten, but the mercurial Mahomes suddenly looked mortal and the rest of the team were unable to pick up the slack for him, Kansas City looked in danger of missing the postseason all together.

Typically enough, the Chiefs have flipped the script once again, gradually pushing their way through the playoff pack with every win, while early frontrunners have crashed to sobering defeats.

The comeback is far from complete though. As we approach Sunday’s contest, Kansas City’s lead in the division is just one game – and it’s not just the AFC West that’s loaded either, the entire AFC is packed with contenders, with 13 of 16 teams still bang in the mix for just seven playoff spots.

In short, winning the division is key and every game becomes that much more vital as we head into the final third of the season. While the Chiefs start as strong favourites over the Broncos – a team they have beaten 11 times in a row – this year has seen far too many surprises to take anything for granted. To get the job done, these will be among the keys for Kansas City this Sunday.

A surprising revelation over their November run was Kansas City’s defense, universally accepted as their biggest flaw in recent years. That hasn’t been the case lately, as they’ve conceded just 47 points in their last four games, holding Dak Prescott and the big-hitting Dallas Cowboys offense to just nine points and Derek Carr’s Las Vegas Raiders to 14. For context, that comes after conceding 30 points or more in five of their opening six games this season – and 29 in the other.

One of the biggest keys to this success has been a much-improved pass rush. The improved fitness and performances of Pro Bowl defensive ends Chris Jones and Frank Clark has made a huge difference to KC’s defensive front, while the trade deadline addition of Melvin Ingram adds depth that they have not had in some time.

The image of an exasperated Tyrann Mathieu holding his hands in the air after yet another big passing gain for the opposition offense has been a frequent sight this year. Yet, the signs are that Kansas City are turning a corner here too.

The Chiefs have 11 takeaways in their last six games compared to just four in their opening five, while their struggling secondary has stepped up to stop big passing plays. Last time out against Dallas they held the MVP candidate Prescott to an average of just five yards per pass attempt in their 19-9 win, with no touchdowns.

This bodes very well for Reid’s side, especially considering Denver’s mediocre passing game. If they can stop Denver from making easy yards through the air, an already limited Broncos’ offense will be stretched even more.

Cutting down the turnovers

Turnovers haunted the Chiefs early in the season. Only the New York Jets have given the ball away more than the Chiefs, while Mahomes has had a particularly rough time. Amazingly, his 11 interceptions this season equal his combined tally from 2019 and 2020, with several coming as a result of forcing the action outside of the pocket.

In the last month, however, Mahomes and Kansas City have clamped down on the giveaways drastically. A lot of credit must go to the offensive line and its improved pass blocking, allowing just 1.3 sacks a game in their last three and giving Mahomes more time in the pocket.

Now, the offense is back to the well-oiled machine we’ve come to expect, demonstrated by Mahomes’ five-touchdown and 406-yard game against the Raiders three weeks ago. Against a well-drilled Denver defense on Sunday, they will need Mahomes again at his brilliant best.

Watch the AFC West divisional matchup between the Denver Broncos and Kansas City Chiefs at Arrowhead Stadium (Kick-Off 1.20am, Monday morning) as part of a triple-header of NFL action on Sunday night, live on Sky Sports NFL from 5pm.