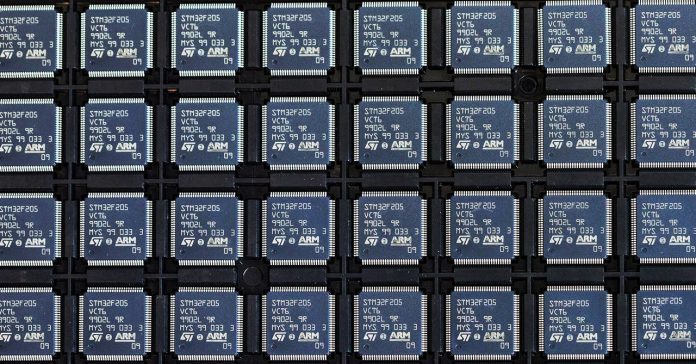 The Federal Trade Commission has sued to block Nvidia’s acquisition of Arm, the semiconductor design firm, saying that the blockbuster deal would unfairly stifle competition.

“The FTC is suing to block the largest semiconductor chip merger in history to prevent a chip conglomerate from stifling the innovation pipeline for next-generation technologies,” Holly Vedova, director of the FTC’s competition bureau, said in a statement. “Tomorrow’s technologies depend on preserving today’s competitive, cutting-edge chip markets. This proposed deal would distort Arm’s incentives in chip markets and allow the combined firm to unfairly undermine Nvidia’s rivals.”

Nvidia first announced its intention to acquire Arm in September 2020. At the time, the deal was worth $40 billion, but since then, Arm’s stock price has soared, and the cost of the cash and stock transaction has risen to $75 billion. The FTC lawsuit threatens to scuttle the deal entirely.

“As we move into this next step in the FTC process, we will continue to work to demonstrate that this transaction will benefit the industry and promote competition,” an Nvidia spokesperson told Ars. “Nvidia is committed to preserving Arm’s open licensing model and ensuring that its IP is available to all interested licensees, current and future.”

The FTC isn’t the first government regulator to scrutinize the deal. In October, the European Union announced that it was investigating the acquisition, and last month UK officials said they were concerned that the merger would threaten both competition and national security. China’s regulators are also looking into the deal, Nvidia said.

Much of the angst surrounding the acquisition stems from the fact that, for most of its history, Arm has been a relatively neutral player in the semiconductor world, offering access to its intellectual property to nearly anyone willing to pay the licensing fee. In the complaint, the FTC called Arm the “Switzerland” of the semiconductor industry. Customers fear that an Nvidia-controlled Arm would place them at the mercy of a competitor, while regulators are concerned that the acquisition would threaten to topple a massive, thriving ecosystem that depends on the architecture.

Arm began as a niche semiconductor designer, offering low-power chips for embedded systems and for portable devices like the Apple Newton and Palm Pilot. Over the years, as the performance of ARM chips improved and the importance of energy efficiency grew, the semiconductors found their way into a wider range of devices.

Today, Arm’s designs and instruction sets are widely used, appearing in everything from mobile phones to servers, automotive airbag controllers, and supercomputers. Recently, ARM chips have started making inroads in the PC world, ramping up pressure on incumbents Intel and AMD. Apple’s M1 chips showed just how competitive the architecture could be with x86 designs, and others have begun to follow suit. Earlier this week, Qualcomm announced a new Snapdragon processor, the awkwardly named 8cx Gen 3, which would run an ARM-specific version of Windows.

Because the ARM architecture is low-power and available to so many different companies, the chips have taken over the industry. Last year, companies sold 25 billion ARM chips, a more than fourfold increase since 2010.

Nvidia has also become an increasingly powerful player in the semiconductor world. Its graphics cards became key tools in machine learning and other artificial intelligence applications, and soon the company started selling chips tailored to high-performance computing. Its mobile Tegra chips, which license Arm’s designs, powered a series of smartphones and Tesla infotainment systems in the mid-2010s, and today they run inside Nintendo’s Switch.