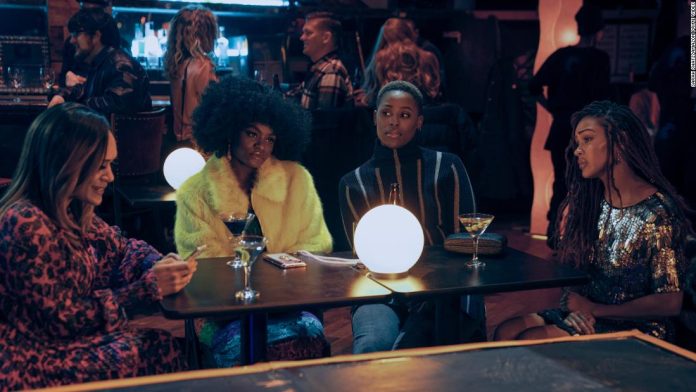 For Black women, anthropology professor Camille (Meagan Good) notes in voiceover at the outset, “The number of actual dateable men is bleak. … We’re dealing with a real-life man deficit.”
Still, finding a guy is only one of the problems that Camille and her closest friends face, with the successful entrepreneur Tye (Jerrie Johnson), who’s gay, having her own difficulties meeting women.
Meanwhile, Quinn (“Empire’s” Grace Byers) is struggling with her fashion-design business, forcing her to grudgingly seek money from her wealthy mom (Jasmine Guy), while Angie (Shoniqua Shandai) is trying to jump-start her performing career with a role in the aforementioned musical version of “Get Out,” if she can manage to keep her mouth shut about the show’s quirkier aspects and her White co-star. (“Harlem” might be worth watching for the songs showcased during those rehearsals alone.)
As for Camille, who serves as the show’s center, she is both pining for the guy that got away while dealing with fresh headaches at work, with a new head of her department (played by Whoopi Goldberg) who appears to disapprove of almost everything she does.
As noted, “Harlem” comes amid a time of abundance for similarly themed series, with HBO Max’s “Sex and the City” revival due shortly, following “The Sex Lives of College Girls” and “Run the World” on Starz.
Still, funny is funny, and thanks to the combination of writing, casting and playfulness exemplified by that “Get Out” wrinkle, the characters and situations consistently pop here despite their familiarity. The show also leans into relevant topics, which includes Tye — who’s marketing a dating app for Black people — wondering if she’ll be perceived as a sellout for dating a White woman.
“Harlem” breezes through its 10-episode first season with a confidence that its central players often lack, with plenty of runway left for more. In the process, it offers another reminder that a series needn’t reinvent the wheel to deliver a worthwhile ride.
“Harlem” premieres Dec. 3 on Amazon.