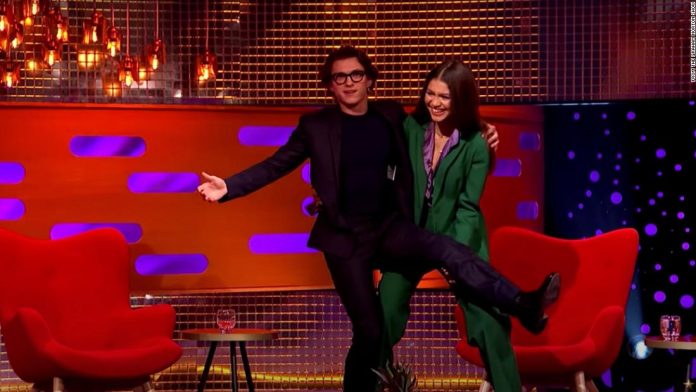 During an appearance on “The Graham Norton Show” this week, the two “Spider-Man: No Way Home” actors told a story about having to accommodate for their height difference when doing stunts, specifically for a scene where Spider-Man, played by Holland, is supposed to hold MJ (Zendaya) and swing them onto a bridge. Spider-Man was supposed to gently rest MJ on the bridge and then walk away, Zendaya explained on the show.
For the uninitiated, Zendaya is a few inches taller than Holland. And as a result, things went a little differently than planned.
“Because of our height difference, if we’re on the same point — we were attached — I would land before him. My feet obviously hit the ground before he does,” she said.
Holland jumped in: “And I’m the superhero. I’m supposed to look cool,” he said, as Zendaya laughed. “And she would land… and my feet would swing from underneath me and then she would catch me.”
The end result, as the two graciously demonstrated on the show, has Zendaya looking more like the superhero than Holland, holding his leg up while the two land.
“You were actually very lovely about it,” Zendaya noted, speaking of Holland. “You would be like ‘Oh my gosh, thank you.'”
Fun stunts aside, “Spider-Man: No Way Home,” which hits theaters December 17, has already been a hit. Tickets for the movie overloaded websites on Monday, with fans complaining that ticketing sites like AMC were backed up. As more movies return to theaters, which have continued facing challenges during the Covid-19 pandemic, hype around such a popular superhero could help cineplexes end the year on a high note.