Home Sport F2 – Piastri closes in on the title with victory over Viscaal... 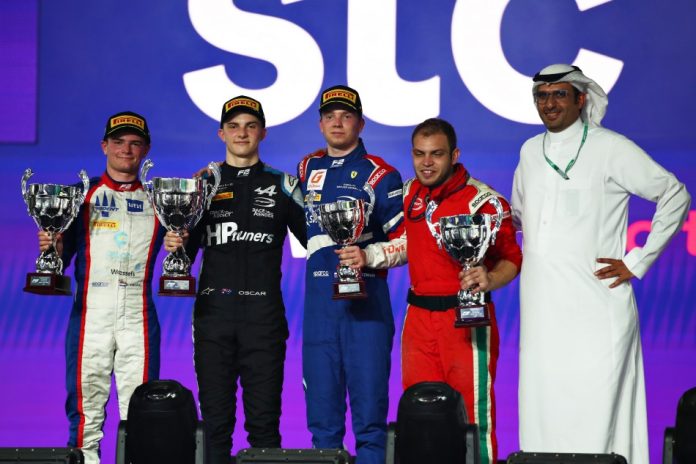 PREMA Racing’s Oscar Piastri edged nearer to the Formula 2 title with his fourth victory of the season in Sprint Race 2 at Jeddah, as Trident’s Bent Viscaal recovered from a slow start to take his second F2 podium. Piastri’s teammate, Robert Shwarztman moved up to second in the Championship standings ahead of Guanyu Zhou, with his sixth top-three finish this year.

Reverse polesitter Jehan Daruvala dominated the majority of the race, but ended up out of the points at the flag, as he was handed a five-second time penalty for the second race in a row, for leaving the track and gaining an advantage, while defending first from Piastri.

The Championship leader made sure of the win by passing the dejected Carlin driver on track. Daruvala’s teammate Dan Ticktum finished fourth ahead of MP Motorsport rookie Jack Doohan, who completed the top five with an impressive performance in only his second race at this level.

Enzo Fittipaldi claimed his first points with seventh, behind Théo Pourchaire, who was up 11 places from 19th. After starting from last, Zhou was only able to add a point to his Championship tally, crossing the line eighth.

Starting from reverse pole, Daruvala was looking to make up for a frustrating opening race where a post-race penalty dropped him from fifth to 10th. And he got off to a great start, darting into the distance when the lights went out and chopping across in front of Viscaal to cleanly retain P1 going into the first turn.

The Trident driver was unable to hold onto second and dropped two places behind Piastri and Christian Lundgaard, but he managed to halt his slide and consolidate heading into the middle sector.

Sprint Race 1 winner Marcus Armstrong was eager to build on his first victory, but the Kiwi was taken out before his defence had even got going. The DAMS’ driver was an innocent bystander in a four-car crunch heading into the first corner, with Clément Novalak, Alessio Deledda and Guilherme Samaia all getting caught up in the collision and forced out of the race.

A Safety Car was required, and action resumed with 15 of the 20 laps to go and Daruvala retained his lead, but Piastri was hot on his heels.

Behind them, Felipe Drugovich had nabbed seventh from Jüri Vips with a clever move at the end of the lap. In an attempt to instantly reclaim the position, Vips got too close to the back of the UNI-Virtuosi and ripped off his front wing, becoming the fifth retirement of the race.

Another Safety Car was needed and just 11 laps remained when racing restarted. Despite a wide moment at Turn 27, Daruvala clung on to first place, spraying dust over the track in the process. Behind them, Shwartzman had been chasing down Ticktum and dragged his PREMA past the Carlin at Turn 8.

There was a sense of Deja vu for Daruvala, who was slapped with another five-second time for leaving the track and gaining an advantage, this time in his battle to keep Piastri at bay.

Third-placed Lundgaard was handed the same punishment just a lap later for the same reason, provisionally promoting Viscaal and Shwartzman onto the podium.

Piastri had the pace advantage over Daruvala and was unwilling to wait for the end of the race to take the lead, diving down the side of the Red Bull junior on the main straight and making it stick coming out of Turn 1, before swiftly building a 1.5s buffer at the front.

The race ended under Safety Car conditions after Liam Lawson lost the rear of his Hitech at Turn 13 and spun into the barriers with two laps to go, meaning that all three of the podium-sitters from the opening race had retired.

Piastri crossed the chequered flag first behind the green-liveried Aston Martin Safety Car, with Viscaal and Shwarztman claiming second and third with penalties applied. Ticktum and Doohan completed the top five, ahead of Pourchaire and Fittipaldi. Zhou claimed the final points’ place in eighth. With their penalties applied, Daruvala and Lundgaard classified 14th and 15th.

“A very good race. I knew that Jehan (Daruvala) had a five-second penalty, but I wanted to get past him on the track and it felt good to win it on track. To get the extra points for the fastest lap is an added bonus too. It was a good race and hopefully, we can repeat it tomorrow.”

Reaching 200 points, Piastri has a 47-point advantage at the top of the Championship standings, with Shwartzman in second on 153 and Zhou in third on 143. Ticktum is fourth with 139 and Pourchaire fifth with 124.