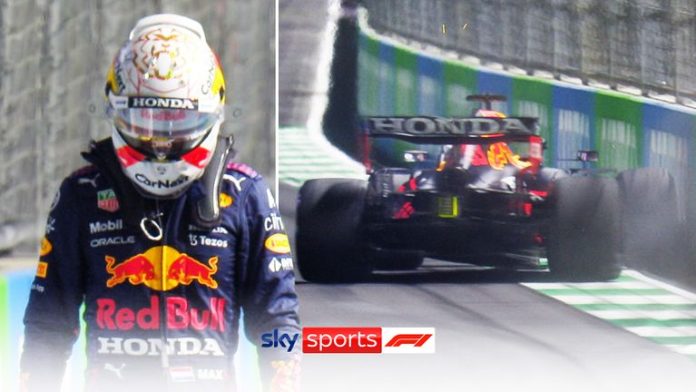 The twists keep on coming in this most incredible of seasons, so will Lewis Hamilton and Mercedes now capitalise on their starting positions in Jeddah or will pained Max Verstappen fight back from third? Watch Sunday’s race live at 5.30pm, with Sky Sports F1 live from 4pm

Lewis Hamilton reflected on a “intense” Saturday at the Saudi Arabian GP on a dramatic day of ultimately contrasting fortunes for the Briton and title rival Max Verstappen which has put the Mercedes driver in the box seat for Sunday’s penultimate race of 2021 – and perhaps now the title battle too.

Hamilton will start from pole position and Verstappen from third when lights go out at 5.30pm live on Sky Sports F1.

In an added bonus for Mercedes, Valtteri Bottas joins Hamilton on the front row.

That starting order certainly had not looked likely until the very final corner of Verstappen’s last qualifying lap, when the Dutchman’s locking of a wheel sent him on a pole-losing collision course with the barriers.

An inconsequential error on many other circuits but one with major ramifications on one lined by walls.

Hamilton, meanwhile, had suffered his own scare ahead of qualifying when he was called to the stewards; facing one charge of allegedly not slowing for yellow flags and another of impeding Nikita Mazepin after a high-speed near-miss in final practice.

A brief but incorrectly illuminated light panel meant no action was warranted about the former, while Hamilton was reprimanded and Mercedes fined for the latter.

“Today has been such an intense day overall,” said Hamilton to Sky Sports F1.

“I slept well, I got here, did our normal work but then P3 was a nightmare with just traffic and the lack of communication with the team. I didn’t know always where everyone was, and it’s really hard because everyone is going at such big closing speeds. Then I was struggling a little bit with the car. “Then to kind of recover from seeing the stewards…

Hamilton, who said the stewards panel which included Silvia Bellot was the most diverse he had been during his time in F1, added: “It’s like being in the headmaster’s office when you’re at school and you don’t know if you’re going to get the detention and you’re going to have to go back home and tell your dad!

“That same nervous feeling that I would get back them I always have when I go to the stewards!”

Hamilton enthusiastically embraced team-mate Valtteri Bottas after qualifying, the Finn having secured second place on the grid after also beating Verstappen’s original pole time on his own final lap.

“It’s great to see him up here and great to see him shining and doing what he does best,” said Hamilton. “He nearly beat me in qualifying so we’ll have a good race tomorrow and work together.”

Holding an eight-point lead in the standings heading into Sunday’s 50-lap race, the mathematics state that Verstappen will become F1 champion for the first time if he outscores Hamilton by 18 points.

The reality is that such a scenario – which in one instance would require Verstappen to win with the fastest lap and Hamilton to finish outside the top five – is dependent on the now-polesitter enduring a nightmare Sunday.

Conversely, if the Hamilton-Bottas-Verstappen top three now finish in the positions they are starting, Hamilton would regain the title lead heading to a decider in Abu Dhabi next week.

But Formula 1 – and this season in particular – is rarely as straightforward as that.

The super-fast Jeddah layout had been expected to suit Mercedes’ car down to the ground but, although they were fastest on Friday, Verstappen was clearly quicker on Saturday with Hamilton and Bottas struggling for tyre temperatures on their W12s.

“We were able to do reasonable lap times but every time Max went out he’d beat the time we just set, and his final run showed clearly that they have the upper hand here on a single lap,” admitted Andrew Shovlin, Mercedes’ trackside engineering director.

“Had he completed the lap, there’s no way we could have matched it so whilst we’re pleased to have the front row, it doesn’t feel like we’ve earnt it.

“It’s hard to know what to expect tomorrow; we were good on the long run on Friday but Red Bull seem to have found a chunk of pace overnight and if that translates into the long run, it’s bound to be close.”