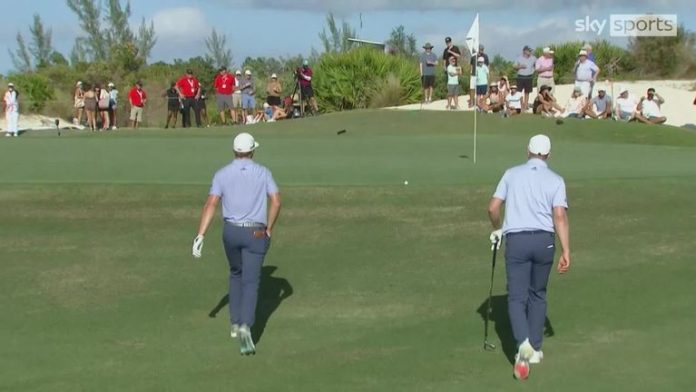 Collin Morikawa squandered a five-shot lead on the final day to miss out on the chance to reach the world No 1 spot; Viktor Hovland finished on 18 under and a shot clear of Scottie Scheffler

Viktor Hovland fired back-to-back eagles on his way to snatching a dramatic victory after a remarkable final round at the Hero World Challenge.

The Norwegian overturned a six-shot deficit on a scintillating Sunday in the Bahamas, carding a six-under 66 to jump clear of a congested leaderboard at Albany and end the week on 18 under.

Hovland bogeyed his final two holes but finished a shot ahead of Scottie Scheffler, who birdied six of his last eight to also post a final-round 66, while Sam Burns and Patrick Reed claimed a share of third on 15 under.

Collin Morikawa took a five-shot lead into the final day and was in pole position to claim the victory required to leapfrog Jon Rahm at the top of the world rankings, only for the world No 2 to have to settle for a share of fifth after a closing 76.

Morikawa let slip his overnight advantage when he lost balls at the fourth and sixth on his way to double-bogeying both holes, as Burns made three constructive birdies from the sixth to jump into the solo lead.

Burns found water off the ninth tee and bogeyed the par-five to reach the turn locked on 15 under with Reed and Hovland, who had matched Burns’ three-birdie run from the sixth to close out a front-nine 33.

Reed bogeyed the 10th and Burns cancelled out a bogey at the 11th with a chip-in birdie off the next green, while Hovland made a two-putt birdie at the 11th but bogeyed the 12th to lose his outright advantage.

The leaderboard became tighter when Morikawa took advantage of the par-five 11th to get within one and Justin Thomas birdied four of his last five holes to close a final-round 64, while Burns’ hopes faded when he triple-bogeyed the driveable par-four 14th.

Scheffler charged into contention with four straight birdies but could not get close to Hovland, who followed a hole-out eagle from the greenside bunker on the 14th by rolling in a 20-foot eagle putt at the par-five next to go two clear.

Hovland rattled in a birdie at the 16th but three-putted for bogey from the fringe at the par-three 17th, giving him a two-shot lead heading into the par-four last, where a two-putt bogey was enough to earn the most unlikely of victories.

Halfway leader Bryson DeChambeau ended the week in 14th place after a final-hole triple-bogey saw him sign for a two-over 74, while a two-under 70 was only enough for Rory McIlroy to finish 18th in the 20-man field.

The bottom two spots were occupied by 2019 champion Henrik Stenson and Jordan Spieth, who both received two-shot penalties for hitting from the wrong tee box when trying to play the ninth hole.