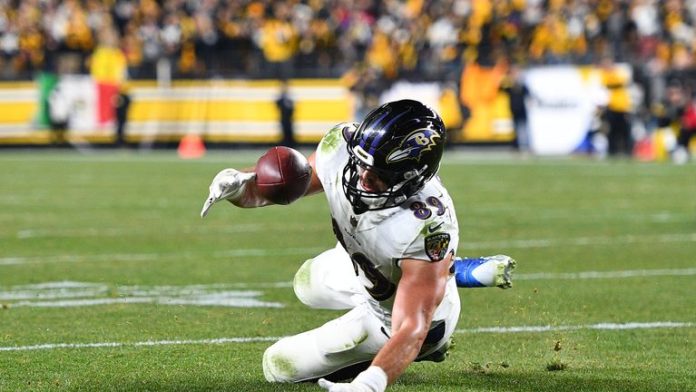 Lamar Jackson completed 23 of 37 throws for 253 yards, with a touchdown and an interception, adding a team-high 55 yards on the ground for Baltimore; Ben Roethlisberger finished 21 of 31 for 236 yards with two passing TDs to Diontae Johnson in the fourth quarter

The Pittsburgh Steelers edged out the Baltimore Ravens 20-19 in a typically bruising AFC North divisional clash as the Ravens missed on a game-winning two-point conversion try as time expired.

In a low-scoring encounter, the Steelers offense finally began to fire in the fourth quarter, with Ben Roethlisberger finding Diontae Johnson for two touchdowns, the second of which was the go-ahead score with only one minute and 48 seconds remaining.

The ensuing kick-off went out of bounds, giving Baltimore good field position. The Ravens then converted on a big third-and-14 as they made their way down the field, Lamar Jackson finding Sammy Watkins with a six-yard scoring strike with 12 seconds left on the clock.

Rather than kick the extra point to take the game to overtime, Baltimore went for two and the win, but despite Mark Andrews being open on the play, the Ravens tight end couldn’t quite stretch enough with his left hand to reel in Jackson’s pass for the game-winning play.

It means that Pittsburgh (6-5-1) return to winning ways after coming under fire during an ugly three-game stretch in which they went 0-2-1 – tying with the then-winless Detroit Lions and suffering a blowout loss to the Cincinnati Bengals. Baltimore (8-4), meanwhile, lose their hold on the No 1 seed in the AFC after the defeat.

A scoreless first quarter would signal the offensive struggles to come, with Baltimore’s opening drive ending in a Jackson interception in the redzone, Minkah Fitzpatrick making the play on the a pass intended for Andrews.

The Ravens eventually opened the scoring in the middle of the second quarter, when Devonta Freeman capped a 16-play, 99-yard drive with a three-yard scoring plunge.

A couple of field goals either side of the half would be the ‘highlights’ of the second and third quarters – Chris Boswell firing through the posts from 53-yards for the Steelers before the break and Justin Tucker nailing a 35-yarders on Baltimore’s opening series after the interval.

Trailing 10-3, the Steelers finally found a rhythm on offense early in the fourth as Roethlisberger first found Chase Claypool for 40 yards and then a wide-open Johnson for a 29-yard score on consecutive plays – though Boswell would missed the ensuing extra point attempt to see the Steelers still trail by one.

On the Ravens’ next possession, a 41-yard pass interference penalty on Fitzpatrick set up a second field goal for Tucker, though Boswell would atone somewhat for his earlier miss with a 43-yard field goal to again make it a one-point game midway through the fourth.

Steelers linebacker T.J. Watt – who entered Covid-19 protocols this week before producing a pair of negative tests in recent days to be able to play – recorded three-and-a-half of his team’s seven sacks in the game, with none more important than that on the ensuing series which resulted in a Ravens punt, setting up the go-ahead drive.

Crucially, following Roethlisberger’s second scoring strike to Johnson, he hit tight end Pat Freiermuth for the two-point conversion to see the Steelers go up by seven.

Baltimore had one final try to go for the win, and though they scored with 12 seconds remaining, Jackson and Andres failed to connect on their two-point try.

The Steelers (6-5-1) are off to Minnesota on a short week, with little time to prepare for a Thursday Night Football clash with the Vikings (5-7), while the Ravens (8-4) face yet another tough divisional test next Sunday as they travel to Cleveland to take on the Browns (6-6).