Home Sport Brundle: Verstappen has to stop these Hamilton tactics 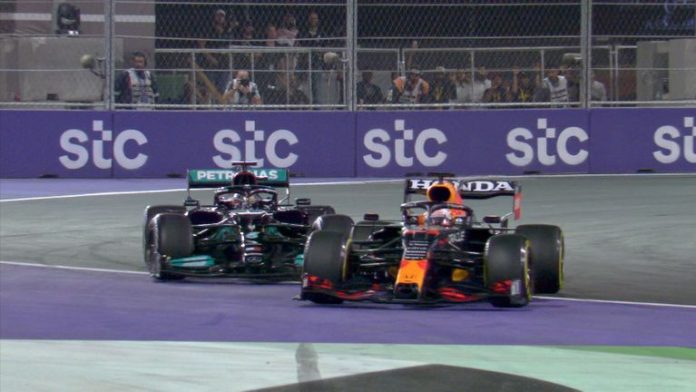 Sky F1’s Martin Brundle unravels the chaos and controversy of the Saudi Arabian GP, explaining the title rivals’ bizarre collision, his unease over Max Verstappen’s style against Lewis Hamilton, and much more; The title rivals are level on points heading to the season-ending Abu Dhabi GP

Formula One has a problem in that the design of the racetracks, particularly with regard to the ‘safety’ run off areas, and the Sporting Regulations, simply can’t contain the way that Max Verstappen is choosing to go racing at the moment.

The FIA’s only way to control him is with endless reviews and occasional penalties.

He’s been playing the game given that, with his points advantage, Lewis Hamilton simply can’t afford to have an accident with him and lose an opportunity to reduce the points deficit. Even now despite being absolutely level on points going into the final round, for the first time in F1 since 1974, that remains the case given that he has a 9-8 race victory tally should there be a count-back.

Such is Max’s car control and cunning he’s sometimes able to pull off the audacious moves and leave a margin of doubt as to whether it’s hard racing or simply a professional foul outside of the regulations. And it’s those moments, such as the infamous turn four in Brazil, which are generating the confusion, controversies and inconsistencies.

I’m in awe of Verstappen’s driving skills and racing nous, and have championed him since the Chinese Grand Prix of 2015 when he was in the Toro Rosso. His touch and control behind the wheel is something to behold, but it saddens me that he’s resorting to such tactics, he’s better than that.

And for all his carefree attitude it will be such a shame if his legacy is to be labelled as an unfair driver.

Ayrton Senna and Michael Schumacher had their faults too, and I was on the receiving end from both of them on occasions, but it’s a sizeable dent on their immense reputations, not a positive.

Unravelling the chaos of the Saudi Arabian GP

Here’s the basic chronology of the 50 lap night race which lasted two hours and six minutes.

One to go: How it stands in the title chases

Before the race it was Lewis under the headmaster’s beady eye after qualifying following a bizarre lap in practice when he badly blocked two drivers including Nikita Mazepin, who he rightly thanked because he saved his championship chances by avoiding heavy contact with the back of the Mercedes.

The second infringement for yellow flags was an absolute nothing given that a marshal button was pressed mistakenly for one second but this didn’t stop Red Bull feeling aggrieved after they were penalised in Qatar.

And so the rhetoric continued, Lewis complaining that Max did a practice start in the pit lane, Max complaining that Lewis was dropping more than 10 car lengths behind when getting ready for the post red flag standing starts. That had more merit, why the rules should be any different for that scenario compared to a normal formation lap makes no sense and could leave cars sitting on the grid for ages.

Max’s error in qualifying putting him third on the grid instead of pole position, and generally poor getaways for each of the three starts would mean he had to get punchy down into turn one before making up his own track layout.

Then the first red flag played perfectly into Red Bull’s hands giving them a free tyre change having rolled the dice by staying out behind the initial safety car. It’s a strange regulation but being able to repair cars and change potentially damaged tyres while the race is neutralised by the red flag keeps drivers in the race, and what goes around comes around in the fullness of time.

Hamilton seized the initiative on the second start and so Max simply drove around the outside onto the run-off area and made up his own field of play. Behind came the rather large shunt triggered by Leclerc and Perez getting together, and what followed was a rather bizarre but apparently not unusual bidding between race control, Red Bull and Mercedes for where on the grid Max would start for the third time as a penalty for passing Lewis off track.

Third place was the answer, now on new medium compound tyres which wouldn’t fare well in the closing laps. His slice up the inside of Hamilton and the then leader Esteban Ocon, who started the evening ninth on the grid, was aggressively perfect as his championship rival had to steer right and somehow didn’t wreck his front wing against Ocon’s Alpine.

Formula One’s luckiest and sturdiest front wing would see further and more intense action yet. After another off-track adventure in turn one on lap 37 Max was instructed by race control via his team to hand the position, and so the lead, back to Lewis ‘strategically’. This would have been a reference back to Bahrain where Max yielded to Lewis putting himself offline and then some way behind, and nowhere near the DRS zones thereby potentially costing himself victory to Lewis in race one of the season.

That was a 14-point swing in Lewis’ favour, imagine how that would be playing out right now…

Max slowed and initially gave space in the curvy run down to the T27 hairpin. Lewis hadn’t yet been informed but he must have been expecting something as his story of ‘I didn’t know what was happening so I didn’t pass him’ doesn’t add up because if Max had technical issues and was dropping out of the race, Lewis would have normally just sailed past. He instinctively smelt tactics and danger.

I believe Max initially made a genuine effort to let Lewis through but when he realised that they were both planning to be second over the impending DRS detection line to gain advantage down the pit straight, and with Lewis now on his rear bumper, he angrily hit the brakes at 69 bar momentarily generating 2.4G deceleration, nearly half that normally generated into a heavy braking zone for a high speed approach to a hairpin, and then pinned the throttle.

Hamilton slammed into the back of him, damaging his front wing along with breaking some rear bodywork on the Red Bull and cutting a tyre. They were lucky not to both be out of the race, which of course would have suited Max just fine. Somehow Hamilton still had more than ample speed with his damaged front wing.

After the race the stewards administered a 10-second penalty to Verstappen for this episode and along with an earlier five second penalty for cutting the first chicane he actually ended up only 5.8 seconds ahead of Ocon who cruelly lost third place on the line to a recovering Valtteri Bottas in the second Mercedes.

Ocon was once again the master of opportunity just like back in Hungary, and it was a bitter sweet result for him in fourth.

Daniel Ricciardo finished a fine fifth for McLaren in front of an equally excellent performance from Pierre Gasly for Alpha Tauri ahead of both Ferraris. Charles Leclerc had been in the wars with the imminently retiring Sergio Perez in his Red Bull, and Carlos Sainz recovered from 15th on the grid to 8th in his Ferrari.

Antonio Giovinazzi, likely now one race from the end of his F1 career, finished a very creditable ninth in his Alfa Romeo ahead of the recovering Lando Norris who grabbed the last point for McLaren after getting very unlucky with the first red flag and a few skirmishes.

The hurriedly finished Jeddah Corniche venue looked incredible under the lights, and the fact that it was an eight-month build project is barely believable although it was rather rough around the edges. I’m not sure that being the fastest ever street circuit is a good target, there are many high risk low skill blind curves, and it’s wide and open enough to see the kind of shunts with the Leclerc, Perez, Russell, Mazepin combo that a street circuit wouldn’t normally generate.

All three F2 races were heavily interrupted too, and although we can expect a different location and circuit at some point in the future, I can’t imagine this one is going to fundamentally change in the interim.

And so it’s an ‘approach with caution’ track, to an extent like Baku, but we had one hell of an event with massive audiences and I’m pleased to have visited Saudi Arabia for the first time. F1 boss Stefano Domenicali was bold when he made no excuses for F1 visiting the country, and furthermore claiming that F1 would help drive a change in culture.

And so to the revised Abu Dhabi Yas Marina layout, and just like 21 races ago there are zero points between Hamilton and Verstappen. This is going to be some showdown.